Have you ever started looking for something only to find other items that are more interesting that what you were looking for?

Today’s find in the “To Do” pile is a picture of front of the Saint Petersburg Mint (translated here) taken by my father during his trip to Russia last year. The sign on front facade “моне́тный двор” translates to “Mint.” 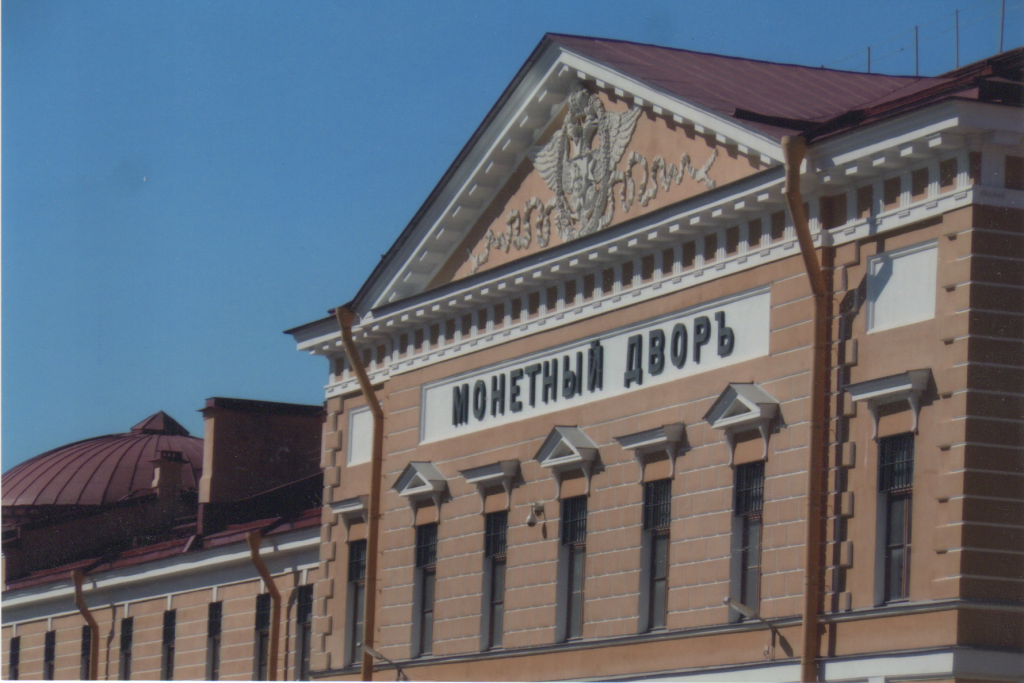 Facade of the Saint Petersburg Mint (2014)

The Saint Petersburg Mint is the oldest mint in Russia. Founded by Peter the Great in 1724, it was the primary producer of coins and currency up until the formation of the Russian Federation and adoption of their current constitution in 1993. The main mint facility is now located in Moscow.

Peter the Great founded Saint Petersburg in 1703 and made it the imperial capital of the Russian empire. Wanting it the to be the most modern city in the world, Peter was proactive in making sure that innovations in infrastructure and cultural life would be available for everyone in the capital. His efforts were fought by the nobility who thought they would lose their power if the government gave more to the people. Peter died in February 1725 from a massive internal infection without realizing many of his dreams for the city.

Following Peter I’s death, Peter’s second wife Catherine I and grandson Peter II, were crowed as tsar of the Russian empire. In 1738, following Catherine’s death in 1737, Peter moved the capital to Moscow but leaving many of the infrastructure behind. Peter II died in 1730 and was succeed by Anna, who was the daughter of Ivan V and niece of Peter I. Anna had been raised with full royal flourishes and chose to move the capital back to Saint Petersburg in 1732 and continue Peter’s westernization efforts for her own pleasure.

The era following Peter I saw the decline of the Russian empire including the degradation of Saint Petersburg as one of the world’s most cosmopolitan city. It wasn’t until the age of Russian Enlightenment under Catherine the Great when there would be improvements in Russian society and the great Mint.

The Russian Enlightenment was the inspiration for Charles Gascoigne to abandon his career as a lead engineer in the steel mills of Edinburg, Scotland and move to Saint Petersburg in 1786. In Saint Petersburg, Gascoigne de a name for himself as an engineer, inventor, and successful businessman. One of his specialties was to take failing businesses and use his engineering skills to modernize their production. One of the businesses Gascoigne turned around was a button foundry whose owner submitted medals made by the machinery to Catherine in order to win a contract to produce more.

Catherine died in 1796 and her son, Paul I was coronated as emperor. Paul was impressed with the details created by the machinery that he was more interested in hiring Gascoigne to update the old minting equipment. Gascoigne first sent engineers to perform the tasks but later took over the projects himself when it was discovered that the machinery being used was in severe disrepair. In 1798 he was assigned the task of determining what it will take to rehabilitate the old Mont.

When Gascoigne did his assessment, he found the entire facility in such disrepair that he proposed a full refurbishing of the facility including buying new machines to coin money. Gascoigne’s plan was to clear everything out of the building and rebuild the floors and walls leaving the outside alone. This included purchasing new equipment and creating new facilities to store and process metals. His plan also included ways to refortify the building that had be subject to thefts. In 1799, Paul issued an imperial degree to allow Gascoigne to execute his plan.

Unfortunately, Gascoigne was caught over charging the Russian bank for materials and was briefly arrested in late 1799. Claiming it was a misunderstanding, a Russian court fined him the amount allegedly overcharged and was allowed to return to the Mint to finish the work.

Gascoigne handed over the management of the mint to the Banking Yard Mint Office Department so that he could concentrate on finishing the reconstruction. Work was finally completed in October 1805 and was handed over the Assignation Bank, who occupied the Mint building. Founded by Catherine the Great, the Assignation Bank was the manager of the money supply in imperial Russia.

The Saint Petersburg Mint survived changes in bank rules in 1843 when the Assignation Bank was dissolved as part of financial reform and the Assignation ruble was recalled and replaced with state credit notes issued by the newly created State Bank. It continued to be the primary producer of coins following the Russian Revolution of 1917 when all of the paper note production was moved out of Saint Petersburg (renamed Leningrad) primarily to Moscow.

Starting in 1961, the Leningrad Mint began to strike commemorative and bullion coins for public sale, primarily to foreign collectors and investors. Although it was the primary mint for creating medals during the existence of the Soviet Union, much of the circulating production was being moved to other facilities within the country. As part of the economic reforms that ended communist rule and formed the Russian Federation, all production of circulating coins were moved to other facilities leaving the Leningrad Mint the country’s producer of medals and collector coins.

As part of the reformation, government offices were consolidated in the capital city of Moscow removing the Mint’s standing as the country’s primary facility. The Leningrad Mint, became a subsidiary facility as part of this reorganization. And with the vote by city residents to rename the city in 1991, it was renamed the Saint Petersburg Mint.