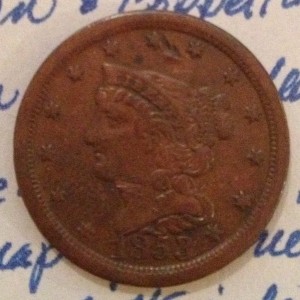 1853 Braided Hair Half Cent Obverse – The last half-cent before being revived for 2016.

In a stunning move of bi-partisanship, the House of Representatives passed H.R. 1776, the U.S. Mint Restoration Act. Under the law, the U.S. Mint is required to produce all denominations of minor coins that it had made in the past.

Starting in 2016, the U.S. Mint will be required to produce the half-cent, two-cents, three-cents, and 20-cents coins using the designs that appeared last on those coins. To save money, the half-cent will be made of copper-coated aluminum while the two-cent coins will be similar in composition with the current Lincoln cent. Three-cent coins will be made of copper-nickel with ratio of 75-percent nickel to 20-percent copper and 5-percent zinc. The 20-cents coins will be a clad coin with no reeds on the edge. 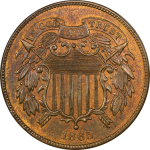 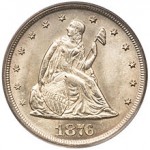 Claiming that they are being faithful to the constitution, Financial Committee Chairman Jim Hensling said that to bring back these coins would not only increase the options for the American public but that the seigniorage earned from making these coins would go a long way to help balance the budget. Speaking with Hensling, Ranking Member Max Waterston was optimistic that this would provide needed relief for low-income people looking to save their change.

The measure was supported by supported by Jan Yelling who also expressed concern that the coin rooms were overflowing with unused dollar coins. However, with expansion at many of the Federal Reserve member bank’s coin rooms that there should not be a problem supplying the country with the new coins.

Looking a little forlorn at the announcement was the U.S. Mint’s Principal Deputy Director Jett Butler. On the job since January, Butler has to figure out how to ramp up production of these new coins in time to have them in circulation by 2016. However, we were assured by Treasurer Rosalind Rio that the U.S. Mint will have the resources to allow them to bring up the production levels to meet the demand.

Bringing back these old denominations will certainly introduce new collectibles to the numismatic community. It will also be an opportunity for the makers of folders and albums to add to their portfolio. It is possible that the result will introduce new people who will collect these coins and learn about the past and why these coins were originally part of the U.S. currency system.

Finally, in a statement read on behalf of Jake Lou, who could not attend, he applauded the work of congress and asked that they consider allowing the U.S. Mint to replace the paper one-, two-, and five-dollar notes with coins. Lou noted that the seigniorage on a five-dollar coin could be as much as $4.50, which could go a long way to help balance the budget. Hensling and Waterston were non-committal on the proposal.