In the 1960s when my parents’ first child was becoming old enough to be enrolled in school, they decided it was time to move out of Brooklyn for the better schools of Long Island. One day, my father found an advertisement in the newspaper for some new homes being built in an old hamlet on Long Island called Inwood. In New York-speak, a hamlet is not an official location but a section of a larger village or township named for jurisdictional purposes. Hamlets are very much like any other area but without its own formal government.

Inwood was one of the Five Towns along with Lawrence, Cedarhurst, Woodmere, and Hewlett. Each had its own character, divisions, points of interest but were together geographically, socially, and and as a larger community. Some of that has changed over the years, but the Five Towns still exists as a central part of life in that area. Although identified as a hamlet, Inwood had its own identity from the rest of the Five Towns. Inwood was more working class than the rest of the Five Towns. It is the home to two schools that were part of the Lawrence-Cedarhurst Public Schools (now just the Lawrence Public Schools), P.S. #4 was the kindergarten and P.S. #2 was the elementary school (then Grades 1-6). There was some industry in an area we called “the factories” and some offices. Not too far was a bowling alley, a few gas stations, and the A&P. A few churches, a synagogue (that no longer exists), the VFW Hall, and the volunteer fire department was all part of daily life.

Many of us have gone in own directions but we cannot forget what made Inwood home for us. One of the ubiquitous parts of Inwood was the golf course. Officially, it is called the Inwood Country Club. Aside from being a private club where many of us were not allowed to enter, it dominated the entire length of Donahue Avenue that was our major route when we walked to school. There were no sidewalks on that side of the street. Trees hung over the shoulder and in the spring and fall you can see and hear the men playing golf.

The last time I visited Inwood, I noticed that the road was better paved and the shoulder that we walked along was no longer available. The fence line came to the edge of the road and a distinct curb was added. The trees were thinner and he shrubbery that dominated the fence when I walked that road was gone. You can now see the golf course from the street.

Although I never went into the Inwood Country Club until I found someone to invite me in the 1980s, its presence looms large in my memory. Our backyard backed up into a swamp-like area owned by the club that would flood when Jamaica Bay overflowed. It was a buffer between the bay and the golf course. The only other landmark in the area that dominated as much as the Inwood Country Club was Kennedy Airport across the bay.

Inwood Country Club was opened in 1901 by Jacob Wertheim because there were few places to play golf on Long Island. Its claim to fame for the golf world is that it was the host to the 1921 PGA Championship that was won by Walter Hagen and the 1923 U.S. Open Championship won by Bobby Jones. The 1923 U.S. Open was Jonse’s first major championship of his professional career. Jones won with what was then considered one of the finest shots on the 18th hole of the playoff that was then called “the shot heard around the world.”

Whenever I find something about Inwood that finds its way for sale I usually try to buy it. Souvenirs from Inwood are not plentiful and numismatic-related souvenirs are even rarer. But when a token honoring the 50th Anniversary of the Inwood Country Club came along, I was a strong bidder. I might have overbid, but I had to make this token part of my collection. 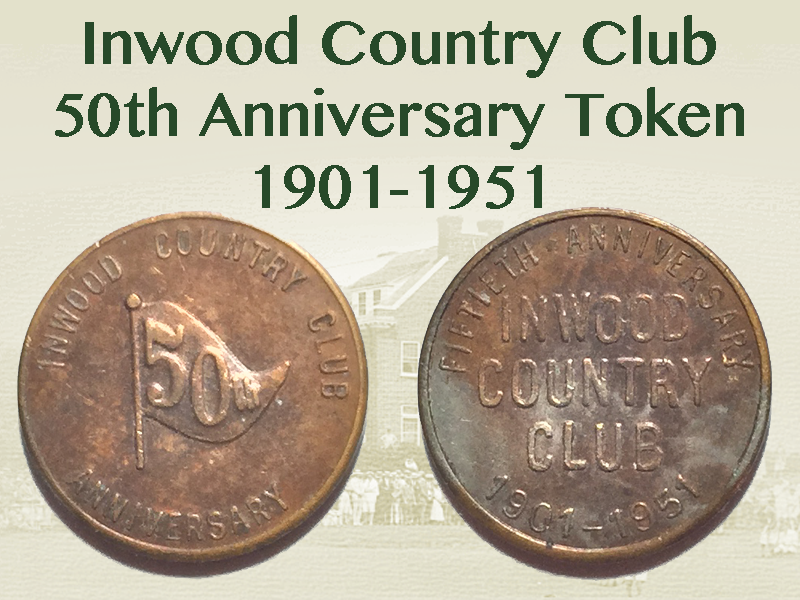 It looks like it is made of a white metal, maybe zinc, coated with copper based on the wearing on the reverse. It is 16.75 mm in diameter making it smaller than a dime, which is 17.9 mm in diameter. But it has survived well for being that small and 64 years old.

This goes to show that you do not have to collect coins to have fun in numismatics!