Every evening I empty my pockets and look at the change that I accumulate during the day. Since I almost exclusively use cash (it is safer than credit cards), I end up with at least a dollar in change. Last week, I pulled out my change and took a glance and saw a nickel that was a bit darker than the others.

Moving it aside so I can look in a better light, I was able to separate a bicentennial quarter and wheat back cent from the other coins before dumping the rest into a pitcher I keep on my dresser. After dropping the quarter and wheatie into a bank where I save these coins, I picked up the dark nickel and went to find a better light.

To make things easier I looked at the reverse to see if it was I suspected and found a large “P” over Monticello confirming that I found a war nickel. For the date, I needed to find my loupe to help my aging eyes focus to tell me that I found a 1942-P war nickel. 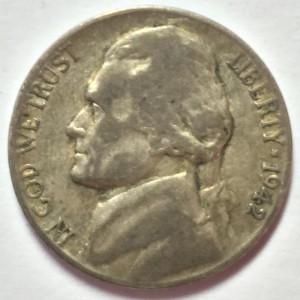 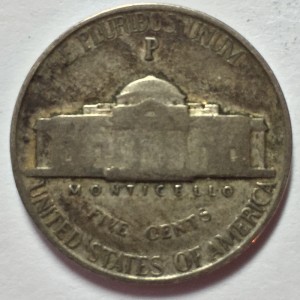 War nickels were struck by the U.S. Mint from mid-1942 through 1945 of an alloy that contained 56-percent copper, 35-percent silver, and 9-percent manganese. Removing the nickel and reducing the amount of copper used in these coins helped save these metals so that they can be used to produce military supplies. One specific need was the copper that went into the brass alloy used to produce bullets.

Looking at the coin and various grading images, if I sent it to a third-party grading service to be graded, it would probably be returned as a VG-8 since it has a little more definition than a flatter G-4. It could be argued that since the rims are more defined that it could be closer to a VG-10, but I would not represent this coin at that grade—besides, it is not for sale! Given that, what kind of profit did I made over the 5-cents face value.

Either way, I made a small profit on the coin and will add it to my hoard of interesting pocket change finds.