I wouldn’t swallow this pill 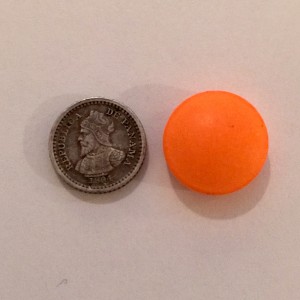 1902 Panama 2½ Centesimos on the left. On the right is a national brand coated aspirin.

Johnny: Making a Mint for $200
Alex: It’s the smallest coin struck by the U.S. Mint.
BEEP!
Johnny: What is the dime?
Alex: No, I’m sorry.
BEEP!
Alice: What is the penny?
Alex: Sorry, that’s not it either. Pat, do you want to guess?
BEEP!
Pat: What is the gold dollar coin?
Alex: No. The correct answer is “What is the 1904 Panama 2½ Centesimos coin?”

Although there are smaller coins, such as the 9.09 millimeter Maximillian coin struck by the Mexico City Mint, this is the smallest ever produced by the U.S. Mint.

After Panama gained its independence in 1904, the new government made the decision to convert its monetary systems from the Columbian peso the balboa. Named in honor of the Spanish explorer Vasco Nunez de Balboa, the balboa would be subdivided into 100 centesimos to use for commerce. But Panama faced a similar problem that the United States faced over 100 years earlier. Since commerce was based on the Spanish Milled Dollar, which was 8 Reales, it was common for the coinage to be divided by 8 rather than 10. Simply, if something cost 1 Reale, referred to as 1 bit for when the milled dollar was physically cut for smaller denominations, a direct conversion would mean that an equivalent to the bit would be 12½ centesimos.

The United States solved this problem by striking the half-cent coin. Panama opted to strike a 2½ centesimos coin that would be paired with the 5, 10, 25, and 50 centesimos coins, all produced by the U.S. Mint. Rather than continually produce these coins until the bureaucracy caught up with commerce as was the case in the United States, Panama ordered 400,000 of these coins. The Panamanian people adapted to the new currency system, making this a one-year type coin.

During our monthly coin club meeting some members bring coins and boxes of foreign coins for other members to pick though. I went to the table where a member brought a box of loose foreign coins and someone found the Panama Pill in the box. Having never seen one before, when the searcher passed on the coin, I took the opportunity to purchase it.

Just for fun, I searched for the next smallest coin in the box. This found a 1963 Sweden 10 ore coin. It is 50-percent larger than the Panama Pill at 15 millimeters but is only slightly heavier at 1.4 grams. The difference is that the Pill was made of silver and the 10 ore is copper-nickel.

Having time to search a box of foreign coins can be a lot of fun. Things you read about in history books, read in the newspapers years ago, and nice designs can be found on many foreign coins. Even though the Eurozone uses a common currency with a country specific reverse, there is nothing like some of the coins that the individual countries produced before creating a common currency.

In that light, our top story of the night, Generalissimo Francisco Franco is still dead. 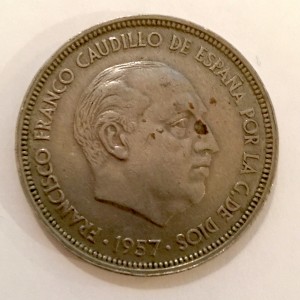 Good night and have a pleasant tomorrow.