Catching up by starting a new collection

It has been a very interesting few weeks since my last post. During that time there was a lot of business activity that I hope will allow be to have more time to do some of the things I would rather be doing, like write. Aside from the blog, I have 95-percent of a collecting-related ebook completed and 80-percent of a different sort of book completed. In between business meetings, I was able to start a book I am tentatively calling “Why did the Mint do that?” which may include information about why the Bureau of Engraving and Printing does what it does including a section on the history of counterfeit detection in the United States.

In the mean time, I have started several posts in the same style that I have been writing for the last few years. Until I can make more time, some long-form tomes will have to wait. Instead of taking the time to write longer items, I will look to write shorter posts including in multiple parts, depending on the topic. This way, I can clear the list of ideas I have been saving.

One more bit of housekeeping before I talk about my new collection: you might see a page that says that I am working on an update. I decided that the blog needs a new look and that periodically, I will work on a theme change. Hopefully, I can finish by the end of the month, but you never know!

That being said, I also had taken the time to start a new collection. While I wanted to start something new for a while and had an idea for a direction, I did not have the opportunity until now.

Earlier this month I attended a local coin show in Westminster, Maryland. Westminster could be considered a distant suburb of Baltimore with a big firehall that housed this show. Although I was there to man the front table representing the Maryland State Numismatic Association as its president greeting people, I was able to slip inside to look around. One of the tables had binders with foreign coins and I started to look.

Grabbing the one for Canada, I remembered that the first official coinage of the Province of Canada. In 1840, the British Parliament passed the Act of Union that merged the upper and lower colonies of Canada into the single Province of Canada. As a province, Canada was able to form a more independent government, even though it was answerable to the Crown. Answering to political dissension that was building in the province, Queen Victoria named Ottawa as the province’s capital. Although the province government met in Ottawa anyway, this was a symbolic move.

One of the problems was the lack of circulating currency. Even though the monarchs loosened the rules on circulating coinage in Canada, there was a need for a larger supply. Even though the Province of Canada’s parliament passed legislation to adopt a decimal coinage, Queen Victoria finally recognized the request. As part of trying to maintain order in the province, Victoria ordered the Royal Mint to produce coinage for Canada starting in 1858.

Canadian large cents with the effigy of Queen Victoria are affectionately called Vickie Cents. With the recent elimination of the one cent coin, looking back at the Canadian cent through its history has become popular with Canadian coin collectors. The key date for Vickie Cents is the first year, 1858 coin.

At mid-grade the 1858 Vickie cent is not that expensive. Although they are harder to find, the demand keeps the price reasonable for the average collector. Although I have been thinking about starting a Vickie cent collection for a while but when I found one in this dealer’s binder, I could not resist!Based on the description in the Charlton Standard Catalog of Canadian Coins, the coin would be graded around F-12. But since it is the first year of issue and the general rule is to buy the best you can afford, this was how I was going to make my start with Vickie cents. 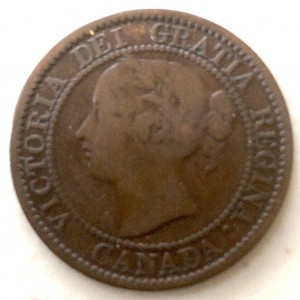 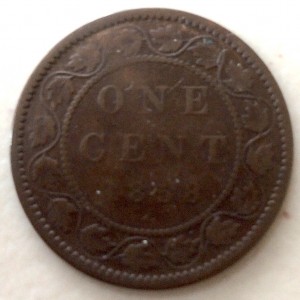 Since I was there I decided that even though it was not the first year of issue, I would pick up the last year of issue. Since Queen Victoria died in January 1901, that was the last year her image appeared on coins in the British Commonwealth. I picked out a nice extra fine example to mark the beginning and end of the series. 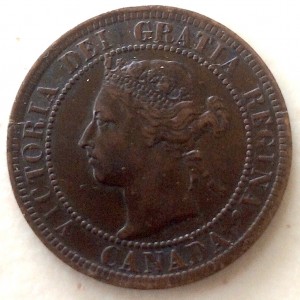 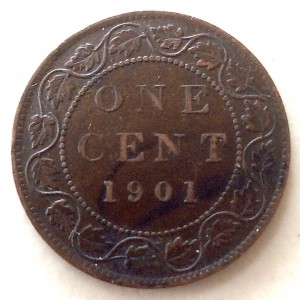 Vickie cents were produced in 1858 and 1859 with a few distinguished varieties. One notable variety is the 1858 coin-aligned reverse. At the time it was the Royal Mint’s practice to have coins aligned in what we call today “medal alignment” where the top of the obverse and reverse point in the same direction. An error at the mint created a rarer coin-aligned (tops on opposite ends) coin. In 1859 there were overstrikes, doubled numbers, alignment differences, and composition differences. If I were to look for all of the known varieties, the cost of the 1859 with a Narrow 9 made of brass (not bronze) would cost about as much as a 1914-D Lincoln cent and be much more difficult to find.

The cents of 1858-1859 were minted in enough quantity to keep the Canada stocked with cent until 1876. New portrait, and varieties, were introduced as well as a striking at the Birmingham Mint, also known as the Heaton Mint, along side the British halfpenny, which used the same planchet. Coins struck at the Heaton Mint were given the “H” mint mark.

Foreign coin collecting can be an adventure that may not be as expensive as their U.S. counterparts. If you are collecting for fun, as I am, pick a country, learn a little about the history, and pick a series to collect. I picked Canada because my wife’s family is from the Province of Québec. Not only will you find it a challenge, but the lower demand may make your endeavor more affordable.