It escaped from Canada! 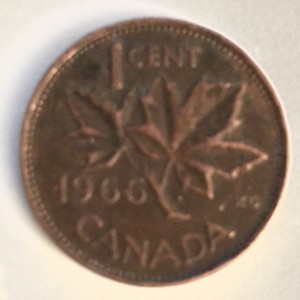 How could it have escaped from Canada?

We need to build a wall!

We know that the Royal Canadian Mint struck their last 1-cent coin in 2012. During the six-month transition, Canadian banks were helping recall 1-cent coins while cash sales began to be rounded up or down to the nearest 5-cents.

But when I made a purchase at a local convenience store, my change included a 1966 Canadian 1-cent coin. Even though the coin is still legal tender it is not usable. I can visit an agent for the Bank of Canada or the Royal Canadian Mint to turn it in for updated coins. I was told that the minimum they will take for exchange is 100 coins. If I can scrape together 99 more coins I can trade it for a Loonie.

Maybe I should go back to that store and see if they would give me a Canadian 5-cents coin and I would give them four U.S. cents. That would make it even.

It’s Friday. Why not have a little fun after finding a Canadian cent in my change!