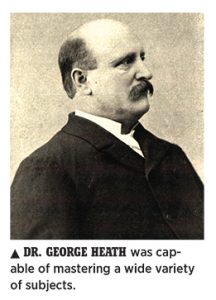 It has been 125 years since Michigan physicist Dr. George Heath founded the American Numismatic Association in 1891. Heath, who operated a coin business on the side, began this journey by publishing his own magazine in 1888 called The Numismatist. He used the magazine as a call to other collectors to create the ANA.

The ANA will celebrate this milestone at the upcoming World’s Fair of Money. In an interesting coincidence, or maybe planning, the celebration will be help practically next door to the place called “The Happiest Place on Earth.” Irrespective of whatever issues anyone sees or perceives with regard to the ANA, you have to admit that an organization like the ANA to survive 125 years is pretty amazing.

If you are interested in a long-form history of the ANA, I recommend reading “125 Years of Collecting with the American Numismatic Association” written by Q. David Bowers. It is not a quick read, but 125 years of history was not easy to create. The current page is in seven parts with an eighth promised for next month. There is no indication if that will be the last part. Still, it is a recommended article.

Currently, if you become an ANA member or renew your membership for 3 years or donate $125, you can receive a 2016 American Silver Eagle graded MS-69 by Numismatic Guarantee Corporation with a special Anniversary Label. I there is a limit of 2,500 coins. If you become a life member or donate $500, you can receive one graded MS-70. There is a 250 limit on the higher graded coins. 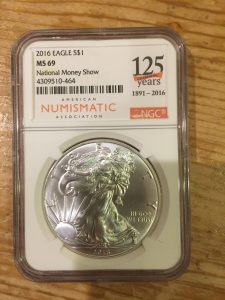 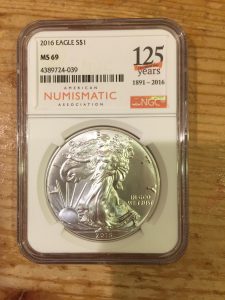 Not only did I take advantage of the renewal offer but added a donation to receive both versions of the coin in MS-65. Although I do not collect grading service labels, this was an opportunity to support the ANA. There may be a limited number of coins left. If you are not a member, you may want to consider joining. If you are a member, either consider a three-year renewal or donate $125 to help the ANA. I believe it is a good cause!

Image of Dr. George Heath courtesy of the ANA.