Proof that numismatics can be used to learn more about history through the economics they represent. Sometimes more telling than coins are exonumia items which have more descriptive value than coins.

Rummaging through a bag of small items recently purchased from an estate sale I found two square tokens. Both are made of aluminum and measured 27mm per side (about 1-inch). Both offer 10-cents off a purchase of personal care products. One will provide a discount on Colgate’s or Palmolive Shave Cream and the other for 10-cents off for the purchase of Colgate’s Ribbon Dental Cream. 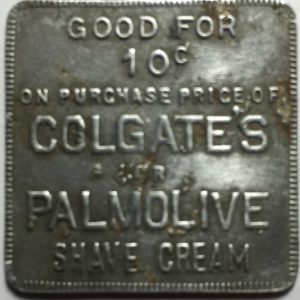 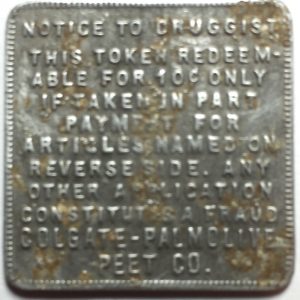 Reverse of 10c token for Colgate’s or Palmolive shaving cream

While these tokens are very interesting, I want to know when they are from? After examining both sides of each token and not finding any indication of a date, it was time to turn to an Internet search engine to figure out when this token could have been made. We start with looking for the company and product information for Colgate-Palmolive-Peet. From this, we found the history of today’s Colgate-Palmolive. 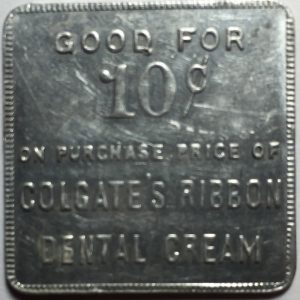 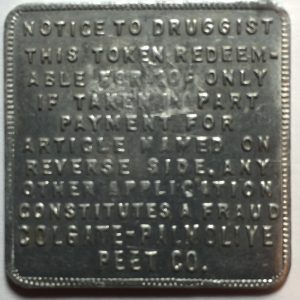 The company was founded in 1806 by English immigrant soap and candle maker William Colgate. Colgate began by making candles, soap and starch in a factory on Dutch Street in New York City under the name William Colgate & Company. Colgate was the first company to begin selling individual soap cakes in uniform sizes. Following William Colgate’s death in 1857, his son Samuel Colgate reorganized business as Colgate & Company. Samuel did not want to run his father’s business but felt its continued existence with the right thing to do.

NOTICE TO DRUGGIST
THIS TOKEN REDEEM-
ABLE FOR 10¢ ONLY
IF TAKEN IN PART
PAYMENT FOR
ARTICLE NAMED ON
REVERSE SIDE. ANY
OTHER APPLICATION
CONSTITUTES A FRAUD
COLGATE-PALMOLIVE
PEET CO.
Text on tokens

Colgate & Company continued to grow. By 1866 the company introduced the first perfumed soap which was then followed by Cashmere Bouquet. It was the first milled perfumed toilet soap, became a registered trademark in 1872. The next year Colgate introduced their first toothpaste that were sold in jars. The product did not sell well until 1896 when Colgate began selling Colgate Ribbon Dental Cream in collapsable tubes. By 1908 Colgate ended production of their jarred toothpaste.

In 1898, B.J. Johnson developed a formula for soap made of palm and olive oils. The soap was so popular that the company was renamed “Palmolive” to reflect the name of its most popular product (I bet you didn’t know where the name came from). By the turn of the century, Palmolive was the world’s best selling soap.

Let’s start with the obvious. Since Colgate-Palmolive-Peet only existed from 1928 through 1953, it would be logical to assume that the token is from that time period.

To try to narrow down the time-period further, I searched for similar tokens to see if I could find other evidence. While searching, I found a set of similar tokens issued by the Palmolive-Peet Company. This suggests that the company could have continued issuing similar tokens following the 1928 merger.

Without having further information the best I can do is narrow the period it was issued from 1928 through 1941.

Of course if you have more information about these tokens please leave comments below.