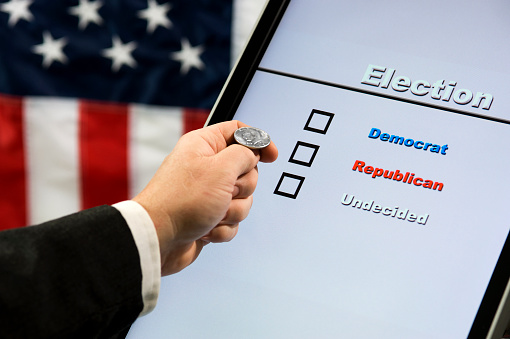 The election of 1800 was a rematch of the incumbent John Adams, the Federalist, and his Vice President and Democratic-Republican Party nominee, Thomas Jefferson. At the time, the president was elected with the most Electoral College votes and the Vice President was the candidate with the second most votes.

There were no rules on how the states selected electoral votes. Some states directly selected electors while others voted for the candidate whose party selected electors. It was 200 years before Florida would become an election issue but for this election, Georgia was the issue when its certificate of election was defective because it was not in the right format. But the President of the Senate, who was the election judge, counted the Georgia votes.

The race ended with Jefferson and Democratic-Republican Vice Presidential candidate Aaron Burr in a 73-73 tie. Since there was no clear winner, the fourth presidential election in the nation’s history set up an early test for the new constitution and was sent to the House of Representatives for resolution.

In 1801, when the House convened on February 11, the chamber was controlled by the Federalists. As the first partisan election, the Federalists were not happy with the choice causing some not to vote or vote against the candidate they liked the least. In 35 ballots over seven days, the vote was 8 states selecting Jefferson, 6 for Burr, and no result for Maryland and Vermont whose delegations tied.

During the votes, Alexander Hamilton, a Federalist, urged his fellow Federalists to support Jefferson. Hamilton thought Jefferson would be a better choice because “by far not so dangerous a man.” Hamilton was not as confident about Burr. Hamilton would later confirm his feeling on July 11, 1804.

After a letter writing campaign by Hamilton, the four delegates from Maryland that supported Burr shifted their vote to “no selection” as did the Burr supporters from Vermont, Delaware, and South Carolina. That would give Jefferson the vote from 10 states to become the third president of the United States.

If we learn nothing else from history, every vote counts. Go out and vote!