A junk box find that is not junk

A few weekends ago, I was out picking when someone offered to sell a box of lapel pins and buttons. Most of the buttons were modern political mainly from the 1988 election through the 2008 election. There was a mix of both major parties along with a number of local and state races, primarily from Virginia.

The box was nothing remarkable. It was originally for high-priced basketball shoes from a well-known company in the western United States. Alongside many of the political buttons were lapel pins and some sports pins. I also noticed some buttons with cute sayings. While being stuck in the fingers I was thinking that I could buy the box and use it as junk filler at a show. Just like coin dealers have junk boxes, those of us in other collectible areas have our versions of junk boxes. In this case, I can lay them out in felt-lined trays and let buyers pick over them for a dollar each.

Flag and ribbon pins always sell. So do buttons that say, “I usually don’t wake up grumpy, I sometimes let him sleep.” This gets the ladies to laugh and look at some of my other items.

After setting up the card table I use to work on this type of sorting, I dumped the box in the middle of the table. Expecting to have to sort through a few hundred pins and buttons when I noticed a 2×2 flip on top of the pile. It was a coin sitting that was sitting in the bottom of the box now at the top of the list of things to look at.

At first glance, I noticed it was not a U.S. coin and thought that it just could be an uncirculated copper-nickel coin until I looked closer. Shifting my glasses to get a better view there was no mistaking the reverse design as a Mexican Liberatad. The 1984 Libertad is clearly marked “1 ONZA PLATA PURA” (1-ounce pure silver) with the obverse declaring it from “ESTADOS UNIDOS MEXICANOS” (United States of Mexico).

I found a beautiful, uncirculated 1984 Mexico Libertad worth more than what I paid for the box! 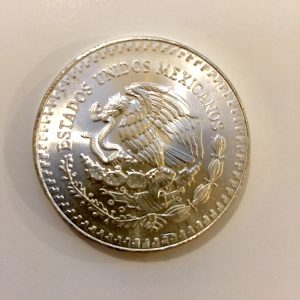 Obverse of a 1984 Mexico Libertad 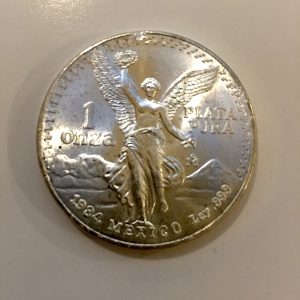 Reverse of a 1984 Mexico Libertad 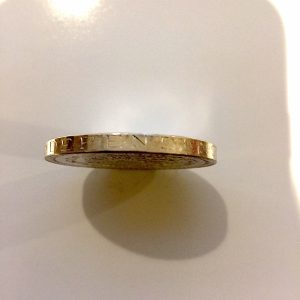 Edge lettering on a 1984 Mexico Liberdad

Although I love large silver coins, I have never owned a Libertad. Did you know that the edge of the Libertad has edge lettering? It reads “INDEPENDENCIA Y LIBERTAD” (Independence and Freedom). The distinctive mintmark of the Mexico Mint is on the reverse and has an overall great look.

I almost did not buy the box!