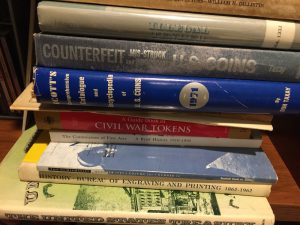 An adage of numismatics is “Buy the book before the coin.” It was first used by numismatist and dealer Aaron Feldman in an advertisement that appeared in the March 1966 issue of The Numismatist. Aside from being used to sell books, this sound advice tells collectors to enhance their knowledge of the hobby.

Education is important because helps build the skills and tools they need to navigate the world. Education helps us read, write, calculate and communicate. Without education, we would not be able to perform our jobs competently, accurately and safely. Education also gives us a view of the world which we live and provides a context to how we arrived at society today.

The areas I find interesting are the history and policies that have led to how things are today. History gives us the lessons learned as to how it was once done and the evolution of the policies that govern the way any institution is run. This is no different for the money manufacturing apparatus of the United States.

I have been on a book buying binge. If I find a book that will add to my curiosity, then it will become part of my growing library. Over the last few months, I have probably spent more on books than coins. With the exception of the few review copies (that I really should review), most of the books I buy are older and have information that I have not found anywhere else.

There are books from my new stack of older books I would like to highlight.

History of the Bureau of Engraving and Printing 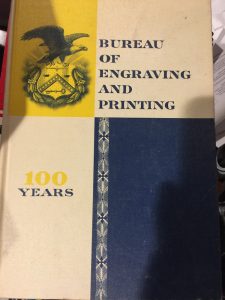 Bureau of Engraving and Printing, 100 Years

It is a beautifully produced book that stands out for its quality in both production and writing. The history of the BEP is well written with images of the process with images of some of the printing element interspersed throughout the text. Also included are intaglio printed images from the Bureau of Engraving and Printing archives. Between the pages with the intaglio prints is a tissue-like paper to help protect and preserve the images.

Although there are many good online histories of the Bureau of Engraving and Printing none of them are complete and does not include the other security printing history of the agency including bonds and stamps.

The most read post on the Coin Collectors Blog is “How easy is it to pass counterfeit currency.” I am fascinated that since I published that post there it has logged over 5,000 unique hits. I am sure that the post is being picked up by search engines and shown to people who are looking for illicit information. They are probably disappointed that the post is not an instruction manual, but I am fascinated that so many people would be interested.

It made me curious about the history of counterfeiting in the United States. Since I am on a book buying binge, it was time to find some interesting titles:

Illustrated History of Coins and Tokens Relating to Canada 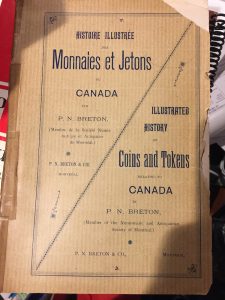 Illustrated History of Coins and Tokens Relating to Canada by P.N. Breton

When I reviewed 2017 Canadian Circulating Coins, Tokens & Paper Money I noted that the third section of the book is dedicated to Breton Tokens. Breton Tokens refer to the coins and tokens that were documented by Pierre Napoleon Breton in 1894. Although I am not a collector of Breton Tokens it would be great to have a copy of the book. Think of it as owning a copy of “Penny Whimsy” by Dr. William Sheldon or the first edition of United States Pattern Coins by J. Hewitt Judd.

I have to admit to “picking” this book during a sale of books from my local coin club. The club is selling off items in its library that there seems to be little interest. Periodically, a few books are brought to a meeting and sold by silent auction. When Illustrated History of Coins and Tokens Relating to Canada, I did not pay attention. I was drawn that it was an older book about Canadian coins and that it is written in both French and English. What made this book stand out is that each page had two columns with the French text on the left and the English on the right. The format was fascinating I bid and won the book. Only after I started to go through my pile this past week to prioritize my reading list did I realize what I had purchased.

Although this is not a priority read, to have a contemporary reference about Breton Tokens written by P.N. Breton should make a fascinating read.

So… what’s on your bookshelf?