What’s with the silver Liberty Medals?

I have delayed writing about my happenstance to attend the Whitman Baltimore Expo waiting for more information on something that was on display at the U.S. Mint booth.

I was not going to visit the Whitman Expo on April 1 because I had a meeting scheduled with a client. After the client canceled, I decided to turn the truck to downtown Baltimore toward the Convention Center. One of the reasons for going was to see the 2017 Liberty Gold coin. I thought it would be my only chance to see the coins since it is unlikely I will purchase one. When I walked to the U.S. Mint booth in Hall C, the gold coin was in a display case. What was next to it was far more intriguing. 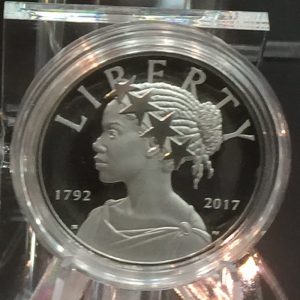 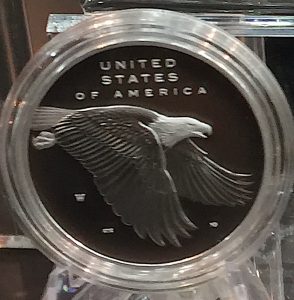 Further examination of the pictures suggests that the reverse proof may be considered enhanced uncirculated where the U.S. Mint laser treats dies to change the texture of the strike. 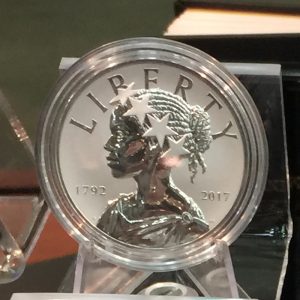 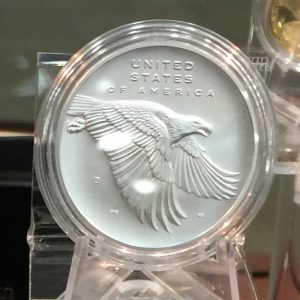 It appears that the medals are the same size as the silver planchets used for the American Silver Eagle coins. If they are using the same planchets, they would be 38.1 mm in diameter of one troy ounce of .999 silver.

The U.S. Mint did not announce the production of silver Liberty medals. U.S. Mint personnel attending the booth were not able to provide additional information. Email inquiries have not yet been answered.

NOTE: Readers of the “Numismatic World Newsletter” were provided a preview of the medals. The newsletter consists of numismatic-related news from non-numismatic sources and a brief article that will not be posted here. Sometimes, I will send items to subscribers before appearing on the blog. Click here to subscribe!