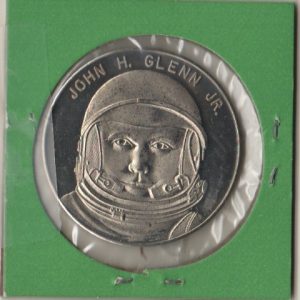 I feel so comfortable saying this that I will not qualify that statement with, “few will argue that ….” When you are the first American to strap yourself into a tiny capsule that is forced into space on top of the Atlas LV-3B rocket, essentially a huge Roman candle, there is no argument on his status in history.

Glenn was not only the first American in space but is also the oldest person ever to go to space. In 1998, at the age of 77, Glenn rode on Discovery on STS-95 as part of a study by the National Institute of Aging. Although the study was not criticized, the selection of Glenn was. While there will be an asterisk in history about the criticism, it will not diminish Glenn’s place in history.

While out looking for collectible inventory, I came across an auction of memorabilia from the widow of a crewman that was aboard the ship that picked up Glenn after he splashed down in the Atlantic Ocean.

On February 20, 1962, Glenn blasted off from Cape Canaveral on Friendship 7 for what ended up being a 4-hour 55-minute flight into history. During the flight, a sensor noted that a heat shield had loosened and could endanger his re-entry. Glenn was ordered to leave a solid-fueled retrorocket pack in place to protect the shield. 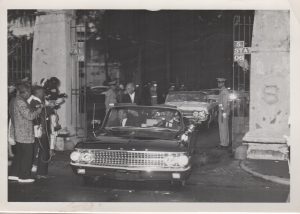 Parade in Florida on February 24, 1962 following the return of John Glenn. 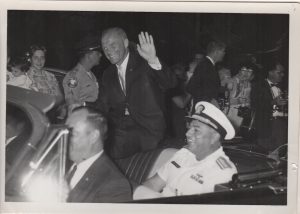 Although Glenn’s re-entry was calculated, he carried a note that read, “I am a stranger. I come in peace. Take me to your leader and there will be a massive reward for you in eternity” in several languages, in case he splashed down in an area where the Navy was not positioned.

According to the auction house, two ships were in position based on the projections as to where Friendship 7 was supposed to splash down in the Atlantic. A third was positioned further south and then moved when calculations suggested that the retrorocket pack would change the trajectory of the capsule. When Friendship 7 splashed down further south than expected there was a race amongst the three ships to see who could pick up Glenn and etch their names into history.

The third and most southern positioned ship, the U.S.S. Randolph (CV-15), was in the best position to recover Glenn and the capsule. In the race to the area of the capsule, the Randolph arrived first and pulled Glenn out of the Atlantic. Glenn remained aboard the Randolph where he was medically examined before the aircraft carrier docked in Florida on Friday, February 23, 1962.

Saturday was shore leave for the crew of the Randolph in Key West, Florida. To celebrate, Captain Claude C. (Buddy) Inskeep and select members of his crew were invited for a pleasure cruise aboard The Big Wheel fishing boat where a number of pictures and autographs were offered. 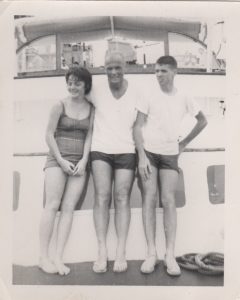 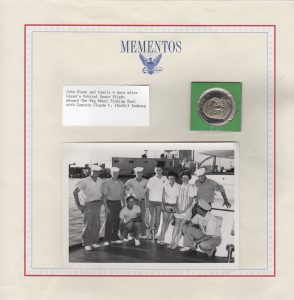 In the auction lot of memorabilia were pictures of John Glenn and his family, a memento picture of some of the people on board The Big Wheel along with a medal featuring John Glenn, and an autographed $1 silver certificate.

It is the silver certificate that makes this lot a very cool find. Technically, we could call this a short snorter since it is a signed piece of paper currency of members together on a trip. But these are not ordinary autographs. From top to bottom the autographs include John Glenn’s wife Annie Glenn; John H. Glenn, Jr.; (John David) Dave Glenn (son, then 17 years old); and (Carolyn Ann) Lyn Glen (daughter, then 15 years old). Below the printed signature of Treasurer Ivy Baker Priest is written “2-24-62.”

I have no doubt that the autographs and the memorabilia are authentic. It is something that you just cannot find every day! Even though I am a dealer and should sell what I purchase, I know that this is a memento from history and of a hero who passed last year. I know I can make a hefty profit from this purchase since I know I vastly underpaid what it is worth, but I am having a hard time considering letting them go.

For now, I own them but might entertain offers. But the offers must knock my socks off because this is just too cool to consider anything else! 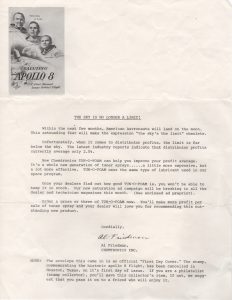 Letter found in the auction lot with the Glenn memorabilia

The First Day Cover (address redacted) that held the letter from Chemtronics, Inc.

Note: On the reverse of the picture of Glenn and Gen. McElroy, it does not identify the general by his first name. Based on some reasearch, I believe this is Major General Ivan Wilson McElroy. If someone has different information, please let me know!