Did you know that someone made a movie about the $2 bill? 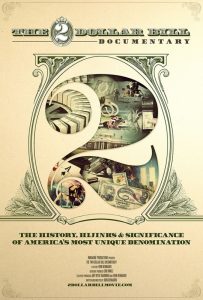 I was looking for information about early $2 notes and an Internet search discovered the page for The Two Dollar Bill Documentary.

Basically, it is a 1 hour 43 minute documentary about the $2 bill. Written and directed by John Bennardo, who has one other film to his credits, writes on the website that he wanted to learn more about the stack of $2 bills he kept in his desk draw. A year and several interviews later, Bennardo had a documentary.

Amongst the people who appear in the documentary is Charlene Williams, Director of Manufacturing at the Bureau of Engraving and Printing facility in Fort Worth, Fred Bart, owner of Executive Currency, and Ben Cohen who is the “Ben” in Ben & Jerry’s.

I do not know how I missed this because it was the Kickstarter campaign written about in CoinWeek, and I am a regular reader. Also, filming began at the 2013 FUN Convention, a show I attended.

It does not appear that the documentary had a wide distribution since I did not find anything about its showing. But for the low sales price of $9.99 you can by a DVD through their online store. It might be worth spending the $10 just to check out the documentary.

All images courtesy of “The Two Dollar Bill Documentary.”