Counterfeiting Around the World 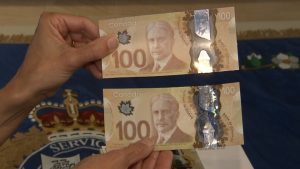 The top note is a counterfeit $100 note, the bottom is a legitimate note

In the past few years, many countries and central banks have released new currency with additional anti-counterfeiting technologies. Canada is currently in the process to transition to the cotton bond currency to a polymer substrate. Since starting the transition, the Bank of Canada is reporting a decrease of 141,502 notes in 2007 ($3.3 million in value) to 17,492 in 2016 ($900,000 in value). For Canada, this is a decrease in 88-percent of the number of notes passed and a decrease of 73-percent in value. 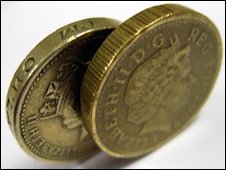 A few months ago, the Royal Mint began the process of issuing a 12-sided pound coin to replace the round-pound because about 2.5 percent of 1.6 billion of 1 pound coins are counterfeit. Although this has been a painful process, the Brits will continue the transition which calls for demonetizing the round-pound by October 15, 2017.

The Bank of England began issuing currency using the polymer substrate starting with the £5 notes. The paper fiver was withdrawn on May 5, 2017 (withdraw the £5 on 5/5… get it?!). Plans continue to issue the £10 note in September.

The move to polymer notes was prompted because of a spike in counterfeiting in 2012. Spiking at more than 746,000 counterfeiting notes with a value of £13.71 million, the Bank of England reports that 347,000 counterfeit notes valued at £7.47 million were confiscated in 2016. 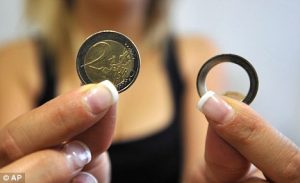 Eurozone has had more problems with counterfeit €2 coins than currency.

The European Central Bank reports that counterfeiting remains low in the Eurozone and even reduced by 20.7-percent from 2015 to 2016. Of the notes counterfeited, the €20 and €50 notes make up 80.3-percent of the most counterfeited currency. Surprisingly, the €100 (at 9.7-percent) and €500 notes (4.9-percent) are not as widely counterfeited. However, the ECB has other concerns with these high denomination notes since the €500 notes are a favorite amongst the cash-based illegal trade because it takes fewer notes to carry a high-volume of currency. One study noted that the €500 note was referred to as the “Bin-Laden” for its added convenience.

The ECB is in the process of transitioning their currency to the new Europa Series. A new €50 note was issued this past April. Aside from new designs, the Europa series uses some of the advanced technologies to prevent counterfeiting but does so on cotton bond. Currently, there is no plan to use the polymer substrate for the Euro notes.

As opposed to other central banks, the People’s Bank of China (PBC) is not as forthcoming with information. But when they do something, news reporters can obtain some nuggets of information from Chinese officials. When the PBC unveiled new 100 yuan notes with additional counterfeiting features, they reported to the Wall Street Journal that police confiscated 532 million yuan ($85.6 million) in counterfeit bills in 2014. The most commonly counterfeited notes were 50 yuan and 100 yuan bills but there have been increases in lower denominations. 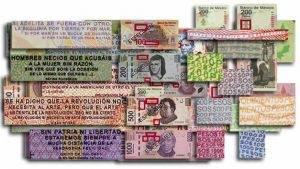 Mexico has been undergoing a slow conversion to polymer notes. Currently, the 20- and 50-peso notes are made using polymer and the new generation of 100-peso notes are made of polymer. Higher denominations continue to be printed on cotton bond but incorporate a number of advanced anti-counterfeiting features other countries are using. The Bank of Mexico has not announced plans to convert higher denominations but a representative reported that the plan is to print future special issues on cotton bond, such as the 100-peso banknote commemorating The 100th Anniversary of The Enactment of the Constitution issued last February. 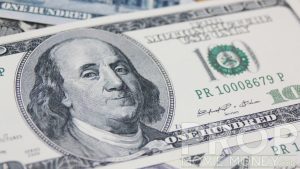 Prop Movie Money continues to be a problem because people just do not look!

According to the United States Secret Service in their 2015 Annual Report, the latest available, they prevented the circulation of over $58 million in counterfeit U.S. currency resulting in the arrest of 796 criminals and closing 145 manufacturing operations. Of the $58 million counterfeited, $28 million, about half, of the bogus U.S. currency was seized prior to it being circulated.

The $20 bill is the most commonly counterfeited banknote in the U.S., while overseas counterfeiters are more likely to make fake $100 bills.

In every report downloaded from the various governments and central banks regarding the security of their currency, it is a common theme that the vast majority of counterfeiting would have a minimal impact if people would just look for the anti-counterfeiting measures these entities go through great lengths to add to the currency. Whether it is not looking for the edge lettering on the old round-pound or the recent cut-and-paste of the security features of Canadian currency, there would be few problems if people would just look.