POLL: Are you interested in the remaining U.S. Mint special collectibles?

Not including the regular issues that will be sold by the U.S. Mint, the items left on their schedule is the American Liberty Four Silver Medal Set and the American Palladium Eagle. 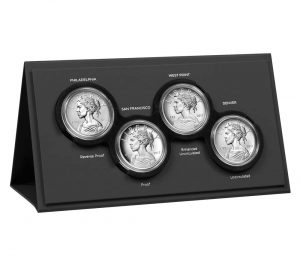 American Liberty Four Silver Medal Set will be on sale on October 19, 2017 at Noon ET

I previously discussed the Palladium Eagle. The american Liberty Four Silver Medal Set are four silver medals featuring the gold 225th Anniversary American Liberty Gold design struck in silver and without a denomination. Each medal will contain one troy ounce of silver and consist of one medal from each of the active mints with different finishes:

Although the price has not been announced, given the current 225th Anniversary American Liberty Silver Medal $59.95, it is within reason to predict that the four medal silver set with special packaging will cost around $250 (plus-or-minus 15-percent).

The poll question of the day is are you going to buy these items?


Are you interested in the remaining U.S. Mint special collectibles?