We send our hopes and wishes out to the victims of Hurricane Harvey. 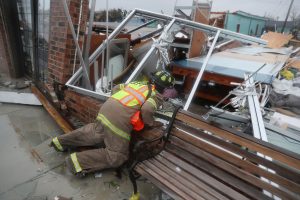 A Rockport firefighter goes door to door on a search and rescue mission as he looks for people who may need help after Hurricane Harvey passed through on August 26, 2017, in Rockport, Texas. (Image courtesy of The Atlantic)

I ask that my readers help those in the affected region by donating to a charity that is working in the region to help.

The American Red Cross needs blood donors. If you can give blood, visit redcross.org/hp/harvey3 to find a blood drive near you!

You can also visit the Red Cross website to donate to relief efforts. Donations can be made by Credit Card or by using your PayPal account. If you are not comfortable donating on the web, you can call 1-800-RED-CROSS (1-800-733-2767) or you can make a $10 donation by texting HARVEY to 90999. The $10 donation will appear on your next cell phone bill.

The National Voluntary Organizations Active in Disaster group has a collection of member organizations who may be taking both donations and volunteers to help the flood-stricken region. You can see the list on their website at nvoad.org/voad-members/national-members.

The City of Houston has established a Hurricane Harvey Relief Fund. You can find out how to donate directly to the fund on the city’s website at houstontx.gov/mayor/press/harvey-relief-fund.html.

For more information about the federal disaster response and other resources, visit disasterassistance.gov.

Finally, for those looking for numismatic content, here is what happened in August before Congress went on summer break:

Sponsor: Sen. Todd C. Young (R-IN)
Introduced: May 18, 2017
This bill requires the Department of the Treasury to mint and issue commemorative coins in recognition and celebration of the 100th anniversary of the American Legion.Surcharges received from the sale of these coins shall be paid to the American Legion for costs related to promoting the importance of: (1) caring for those who have served, and those who are still serving, in the Armed Forces; and (2) maintaining patriotic values, strong families, and assistance for at-risk children.
Read twice and referred to the Committee on Banking, Housing, and Urban Affairs. — May 18, 2017
Passed Senate with an amendment by Voice Vote. — Aug 3, 2017
Held at the desk. — Aug 4, 2017
This bill can be tracked at http://bit.ly/115-S1182.