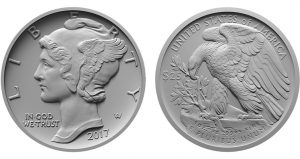 The U.S. Mint announced today that sales of the American Palladium Eagles will begin on September 29. As bullion issues, they are being sold through with authorized channels and not directly to the public.

After seven years since the law was passed (American Eagle Palladium Bullion Coin Act of 2010, Pub. L. 111-303), these coins Will begin their sale. There is no indication whether the U.S. Mint will offer collectable versions or just release the bullion coins.

The coin will have a $25 face value and require that “the obverse shall bear a high-relief likeness of the ‘Winged Liberty’ design used on the obverse of the so-called ‘Mercury dime’” making it yet another bullion coin that will feature a design from the early 20th century. For the reverse, the law says that the coin “shall bear a high-relief version of the reverse design of the 1907 American Institute of Architects medal.” Both the Mercury Dime and 1907 AIA medal designed by Adolph A. Weinman, whose Walking Liberty design is used on the American Silver Eagle coins.

No price has been announced but the current Price of Palladium is $911.63. As a reference the current spot price of metals are as follows:

Precious Metals Price Snapshot as of September 19, 2017
(This is a static chart—it does not update)

The U.S. Mint does not publish the bullion and bulk sale prices the way it does for collector coins but it is likely that these coins are sold to distributors at a premium over their spot price. I guess we will find out how much these coins will cost for investors and collectors purchase when they hit the market.

For today’s poll, are you going to buy one?