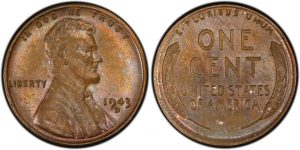 Fans of the NBC show The Blacklist that watched on Wednesday, October 4, would have noticed there was a numismatic role added to the script.

Raymond Reddington, played by James Spader, was trying to gain the attention of a high-rolling thief and found himself at a numismatic auction. The item up for bid was the 1943-D Bronze Lincoln cent. As part of the story, it was announced that it was the only one known to exist and that it was graded by the Professional Coin Grading Service.

Since then, more 1943 Bronze Lincoln Cents were found including a 1943-S graded MS-62BN by PCGS. That coin was sold to Bill Simpson, a co-owner of the Texas Rangers, for $1 million in 2012. Simpson owns a complete set of 1943-PDS and 1944-PDS off-metal Lincoln cents, the latter made of zinc coated steel.

In the show, the hammer price was $3 million. All things considered, it is probably an accurate estimate of what the coin might be worth if it were to come to market today.

Of course, they did not use a real 1943-D Bronze Lincoln cent and there was a mistake when the coin showed up later in the story. But if you have not seen this episode, I am not going to spoil it for you!