NOTE: I reached out to LeRoy Transfield, the winner of the design competition for the World War I Centennial Commemorative dollar coin to ask about his experience with the design competition. He sent me a copy of his story with permission to publish it here. The following is what he sent. I had additional questions. Those will be published tomorrow. 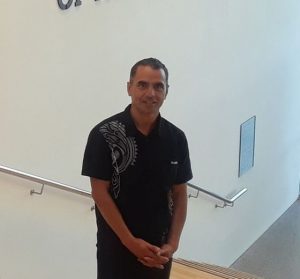 When I first heard about the world war one design competition by the United States Mint for a commemorative coin I was very excited. I was interested and inspired for many reasons. First off, ever since I was very little I was fascinated by war and war stories and comic books depicting war. The high light of my week was to watch the British Documentary World at War. Since then I still enjoy many aspects of history, not just war. But war is a big part of our world because the way that things are now came about from those wars.

Secondly, I was excited because I am a sculptor and love sculpture of all kinds. My specialty is sculpture in the round, figures, people. I have done very few low relief sculptures and no coins. Despite this, I enjoy looking at well-sculpted coins and even have a small coin collection of my own. My favorite American coin is the Standing Liberty quarter by Hermon MacNeil.

Thirdly I have done a number of war memorials for local towns in the area including the city I live in. During these experiences, I have gotten to know many veterans and people that fought in most of the major wars of the 20th century. Many of them including people I worked very closely with are now gone. But I often think of them and how their lives have touched mine.

Last, I was inspired by my own family. Both extended and immediate. I have been supported and helped over the years and always feel grateful for their support. Also, my Great Uncle on my mother’s side actually fought in World War One as part of the Maori Battalion. The Maori Battalion were part of the New Zealand Expeditionary Force to aid the allies. The Maori are the indigenous people of New Zealand.

All this excitement and energy flowed through me when I first got the news that I was a finalist. I so wanted to create a great design! Even though I had seen many WW I movies already and new the history, I review many pictures, books, films and documentaries to focus on the American role in the war.

I also looked at great coins. Not so much as to get an idea for a design or copy them, but to dissect those good coins and figure out what made them so good compared to average coins and what rules helped them achieve such inspiring results. I wanted an original design but one that followed those lines of greatness.

I thought about the poem, In Flanders Fields and thought Poppies would be a good thing to put in there somewhere. I also thought of the armistice and how excited everyone was when the hour came. A peace that may well not have happened without American support.

With all these thoughts, I started drawing images. I drew for two weeks. Ideas and designs of mostly soldiers in different poses that could easily be accentuated in a relief coin design. After this I started making clay versions of my sketches and quickly realized the drawings were useless and didn’t help me see problems in the design once it was built up in clay.

After about 4 or 5 weeks I was hitting a wall. No really good design was standing out from the numerous changes and trials I had done. The mint offered a conference call to all 20 participants to go over any questions we might have. This was of great help. In the call, I asked, what is the most common mistake made by beginning coin designers. The person, I forgot his name, said the most common mistake was adding too much detail to the 8-inch mock-up because one has to keep in mind that the final will be only 1.5 inches and much of the detail will be lost. Even though I already knew this it sank in even more. The other impression I got from the call was that the mint is really leaving things open to the finalists and wants to see what we can come up with, and not worry a whole lot about whether the design is right for coining as they have sculptors would fix those problems. They just wanted to see what we could come up with.

The first thing I did was scrap the board I was working on. At 18 inches, it was way too big. I thought that in working larger than the required 8 inch casts to be submitted, I could make a good large design and boil it down to a really good 8-inch final. Instead, I went the opposite way and started to work smaller than the 8 inches to get a better feeling of a coin. I started sculpting on 4-inch wood discs. This really helped a lot. It made it way easier to make a quick design and

help me see if it was going to work. I finally came up with the soldier profile, collar up and a rifle slung over his shoulder. This was not the final design but a good starting point. As I had the soldier in profile worked up, I wanted to add to it but knew not what it needed. That night I had barbed wire going through my head. Soldiers charging barbed wire, wire in the dirt and finally somehow, wire on my relief sculpture. After dreaming about barbed wire, I went to the piece and add the two small strands of wire in opposition to the rifle and the soldier. The hands also seem a natural thing to add and just like that I had the design for the Obverse.

I was very demanding on myself and didn’t say, that’s it, that’s the one. What I said was that’s a good Obverse, now make another. Another one never came. I was running out of time so I decided then to make that my Obverse and put my thoughts into the reverse. I actually thought I had a good idea already, an eagle. It was going to be a diving eagle, in profile, with wings outstretched holding arrows and an olive branch. In the eagle’s beak would be a banner with the words e plurubus unum. In the background would be a map of Europe. I just knew it would look good. But when I fleshed it out it looked terrible!

I looked for another idea. It had to be as good as the soldier. The eagle didn’t work but I wanted to try a bird again and knew that carrier pigeons were used a lot in World War One so I decided to use a pigeon. I looked at many pigeons and pigeon photos and sculpted up something I thought looked ideal. This was good because the time for submitting was running out! I had only three days left.

With the pieces molded and cast to the 8 inch specifications I had the two designs. The soldier looked good. I had different thoughts about the pigeon. I sculpted the bird as best I could but the final reverse looked not near as good as the obverse. I was dumbfounded. I had to send the pigeon, time was up, I had no time to make another. But as I looked at the pigeon I became more and more alarmed to the point where my stomach ached to look at it. I was tired of the whole project.

I thought I should just send it and be done with it. But on more reflection, I just couldn’t do it, I couldn’t send it!

Firstly, I thought of the embarrassment of the committee seeing this lousy pigeon. I wouldn’t be there, I reasoned, but that didn’t help. Sure, they might like the soldier, perhaps they will choose that and another reverse. Even so I just couldn’t send it. So, I did a thought conversation and said to myself if you don’t like it they make something else, in your style, that you do like. Even if the committee doesn’t like it at least you can be happy with what you send and no regrets. But then I would vacillate back to you have run out of time just send it and be done with the thing.

At that time, my daughter wanted to go on a 9-mile bike ride up Provo Canyon, a favorite summer activity and jump off a local bridge into the chilling Provo river. School was about to start so this would be one last activity with my daughter. The ride there took about an hour. In retrospect, this time away made all the difference in my final decision to send a different reverse. As I left and rode away from my work I had a greater perspective. I could see I had learnt a lot in the last 10 weeks about coin sculpting and may well be able to come up with a good design in two days. Halfway into my ride I convinced myself that the pigeon had to go and now, what was I going to do to replace it? As we got to the bridge I came back to the beginning, poppies. But poppies are a little uninteresting and not that good looking in relief coin sculpture. So, my next thoughts were how to make the poppies look better.

This was all going on while I was enjoying the summer weather and river water with my daughter. To jump into the river, one would climb up on a steel rail about 4.5 feet above the bridge, balance there and jump into the water 15 feet below. It was exhilarating. Standing on top of the rail is quite an inspiring thing. The beautiful canyon, trees, rocks, and water looked awesome. I often thought that on a stormy day a bolt of lightning could easily find its way to the person standing perched so high on the bridge. As I stood there I thought came to me of using the barbed wire again in contrast to the poppies. I’ve got it I said and jumped into water fridge water. I had it all now, in my mind.

All I needed to do was go home and put in down in clay. When I got home my wife to catch up with me on her day. We talked about the recent passing of my old sculpture teacher and some of the funny stories he would tell us students. All this time I was sculpting the poppies and the wire. In an hour, it was done. That’s it! I said. I was unsure if it was a winning design but it was a design I could put my name to and come what may, I wasn’t embarrassed.

The plaster casts made it to the US mint the very last day of the deadline.

Portrait of the LeRoy Transfield taken from the artist’s website.