The Royal Canadian Mint has created two unique coins they call “Nocturnal by Nature” that would fit the theme of Halloween.

What makes them interesting is that the fields and some of the devices are plated with black rhodium to create a darkened look.

The first coin’s reverse, which is sold out, features a barn owl (Tyto alba) descending upon its prey. The view is looking up as the owl descends toward the night sky.

The second coin’s reverse has an image of a brown bat, darkened by night with its silhouette as it crosses passed the moon overhead. 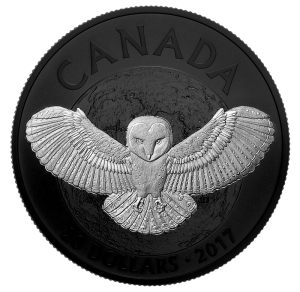 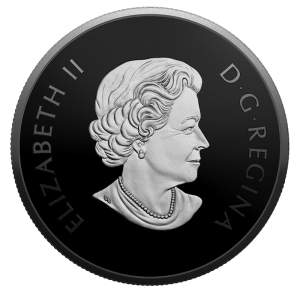 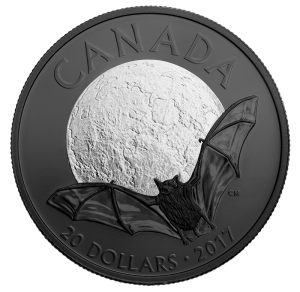 As with all Canadian coins, the obverse features the official Royal Canadian Mint portrait of HM Queen Elizabeth II. The fields and legends are also plated with black rhodium that will make the Queen’s portrait really stand out.

Each coin is one troy ounce of .9999 silver, has serrated (reeded) edges, is 38 mm in diameter, and weighs 31.39 grams. Both coins have a face value of 20 dollars. The Royal Canadian Mint classifies the finish as matte proof.

The single barn owl coin appears to be sold out on the Royal Canadian Mint website but looks like it can be purchased as part of their subscription program.

It may be too late for Halloween but they look very interesting!

All images courtesy of the Royal Canadian Mint.