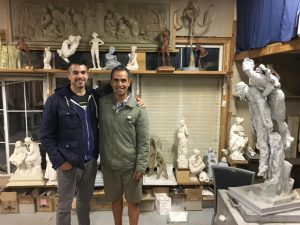 In a rare Monday holiday appearance by government workers, the U.S. Mint announced that they selected a design for the World War I American Veterans Centennial Commemorative Coin.

The winning design was submitted by LeRoy Transfield, a sculptor from Orem, Utah.

In an interview that appeared in the Desert News, Transfield said that he had two uncles that served as members of the New Zealand Expeditionary Force Native Contingent during World War I. This lead to his interest in learning about the history of the war. 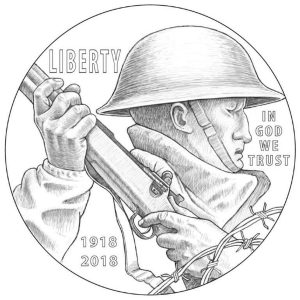 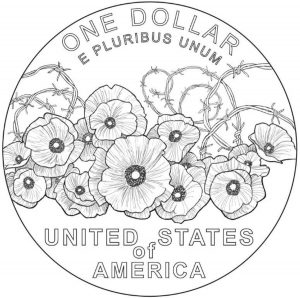 For the obverse, Transfield titled it “Soldier’s Charge.” In the interview, Transfield said that he “didn’t want him to look like some model in an artist’s studio. I made his nose like it might’ve been broken. I wanted to give him a rugged looking face. … I wanted that feeling of combat”

Transfield said that the reverse was more difficult to for him to design. After several tried he came up with the “Poppies in the Wire”

In 2012, I wrote about the poem “In Flanders Fields” and suggested that it be adopted on a U.S. commemorative coin. It only took five years for my suggestion to become a reality! You can read about the poem and my recommendation → here.

Poppies are a fitting tribute since their use was inspired by the poem “In Flanders Fields.” The poem was written by Lt. Col. John McCrae, a Canadian physician following the funeral of a friend and fellow soldier who died in battle. It was published in 1915 and first adopted by the American Legion to commemorate the American Soldiers killed in the war. It was later adopted by veterans groups within the British Empire including Canada.

Transfield is originally from New Zealand but moved to the United States to attend BYU-Hawaii. After graduating with a Bachelors of Fine Arts degree, he moved with his wife to Orem where he operates a sculpting studio in his garage.

Based on the line drawing, it appears that this is going to be an excellent design when struck on a 40mm silver planchet. This is one time where it appears that the Citizens Coinage Advisory Committee and the U.S. Commission of Fine Arts got it right in picking the design.

Given the texture in the both the soldier on the front and the poppies on the reverse, it will be interesting to see if the U.S. Mint comes up with an enhanced uncirculated version. It could be extraordinary!