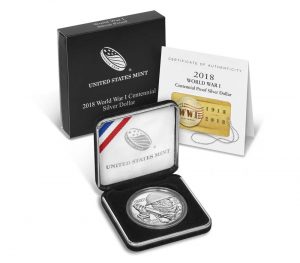 Of course, the U.S. Mint will sell an uncirculated and proof silver dollar that will come in their usual display cases with a Certificate of Authenticity. These are the coins that are required under the authorizing law (World War I American Veterans Centennial Commemorative Coin Act, Public Law 113-212) that were designed by LeRoy Transfield.

The U.S. Mint will also be selling five silver medals that will be issued in conjunction with the 2018 World War I Centennial Silver Dollar. Each medal, composed of 90 percent silver, pays homage to branches of the U.S. Armed Forces that were active in World War I: Army, Marine Corps, Air Service, Navy, and Coast Guard. Medal designs were announced last October. However, the U.S. Mint will only be selling the medals as part of a set with the silver dollar. 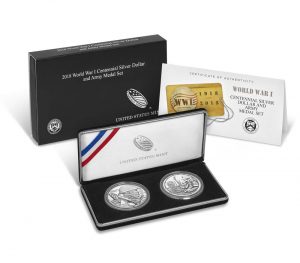 By not selling the silver medals individually or as a set, if a collector wants to add all five to a collection, it will cost $99.95 per set ($499.75 total) and will require the purchase of five commemorative silver dollars.

Since there are no more surviving veterans of World War I, one can only assume that the commemorative coin and medal sets are being marketed to those that want to remember the service of those veterans. Creating these sets in this context makes sense. It does not make sense for the collector or for someone whose family did not serve in World War I or wants to just collect the medals.

This short-sightedness by the U.S. Mint may hinder potential sales of the commemorative coin whose proceeds are to benefit the United States Foundation for the Commemoration of the World Wars, an organization responsible for making sure we do not forget those who served.

With the decline in silver prices and the market interest in investing in silver at its lowest since before the Great Recession, a short-sighted decision like this will limit the sale of silver medals. This will lower the income and seigniorage the U.S. Mint will collect after seeing a decline in the sales of bullion-related products.

If the U.S. Mint cannot get this right, then maybe they should have a more broad community discussion so they can better understand the potential collector market because on this, they bombed!