Yet another quarter series? 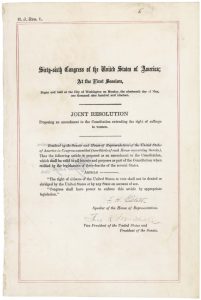 With so little happening in Congress regarding numismatic-related legislation, it should not be a surprise that I would become excited I am alerted that there was something to see.

The excitement wore off when I saw the bill that was introduced.

Rep. Barbara Lee (D-CA) introduced H.R. 5308 with the initial title of To amend title 31, United States Code, to require the Secretary of the Treasury to mint and issue quarter dollars in commemoration of the Nineteenth Amendment, and for other purposes.

The text of the bill is not available, yet.

The Nineteenth Amendment granted women the right to vote. It was the culmination of the women’s suffrage movement. To amend the constitution, it passed the House of Representatives on May 21, 1919, the Senate on June 4, 1919, then by 36 of the 48 states on August 18, 1920.

How do you create a design to commemorate the Nineteenth Amendment? Will there be one quarter per state? If so, what would be on Maryland’s quarter? Maryland rejected the amendment in 1920, the legislature ratified it in 1941, but the vote was not certified until 1958.

Then there is Mississippi that rejected the amendment in 1920 but passed it in 1984 becoming the 48th and last state to ratify the amendment (Alaska and Hawaii were not admitted to the union at the time and are ineligible to vote on the amendment).

While it is appropriate to celebrate the 100th anniversary of Women’s Suffrage, maybe it should be a commemorative coin with the proceeds going to an organization like the League of Women Voters.

H.R. 5308: To amend title 31, United States Code, to require the Secretary of the Treasury to mint and issue quarter dollars in commemoration of the Nineteenth Amendment, and for other purposes.