While browsing on eBay, I noticed a few auctions of what I thought were philatelic (stamp collecting) cachets with Morgan and Peace dollars honoring different aspects of history. Not knowing much about them, I placed some bids based on the estimated values of the coins.

Another interesting collectible that combines philately and numismatics is called a Philatelic Numismatic Cover (PNC) or sometimes just coin cover. The U.S. Mint has produced coin covers for the 50 State Quarters, Westward Journey, and Presidential Dollars series as well as the first Sacagawea dollar. These are fun collectibles and something I will talk about in the future.

When the auctions were over, I won one with the 1926-S Peace dollar. Although the description seemed in order, I did not know what to expect. When it arrived I think it is more interesting than advertised.

First, the item is not an envelope by a heavy stock card that is 9-inches long by 4.875-inches wide. It is to honor the anniversary of the United States agreeing to join the World Court on January 27, 1926. The card includes a 5-cents stamp commemorating International Cooperation Year that was issued on June 26, 1965, and a 33-stamp that was in use when this was created in 2001. It is postmarked on January 27, 2001 in Washington, D.C., the 75th anniversary of the event. 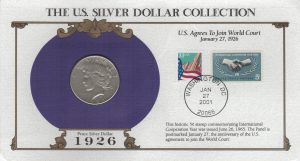 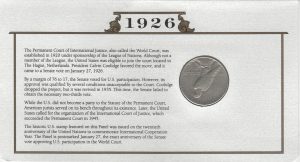 The Peace dollar is definitely circulated and would probably grade in the Very Fine range if sent to a third-party grading service. It is encased in plastic which is sandwiched between two panels of cardboard to make up the card. The back of the card has a longer narrative of the history.

Originally, I was only interested in it for the coin since I am a fan of the Peace dollar. But seeing the card makes me wish I would have bid higher for more of them. The other problem is that I do not know who made them. This card looks similar to ones described as being from the Postal Commemorative Society. However, I have seen several different descriptions to make me unsure.