Small Cash and a Pill

Sometimes it can be fun to search through junk boxes or bags of foreign coins. While you can see a lot of the same coins accumulate in these bags there are others that look interesting.

During our local coin club meeting, members bring in coins to sell to other members. One member, a very prolific collector, had a large plastic bag of circulated foreign coins. I was first drawn to the back by some of the shapes I found. I grabbed a handful and one coin fell on the table that really caught my eye.

It was a small coin. A very small coin. Nobody had a caliper but it was really small. Even though I was looking at the different shapes, I found this very small round coins intriguing. What was it?

Although I should become better at recognizing languages that are not based on the Latin alphabet, I asked my fellow club member if they could help identify the coin. He said that he could not identify the coin but recognized the lettering as being from India.

With that knowledge, I did not have to search the entire Standard Catalog of World Coins to figure it out. Start at the beginning of the Indian coins and see what we could find.

After a few minutes of looking, I found the listing. Then I found a second one that was very similar. Which coin did I have and where did it come from? 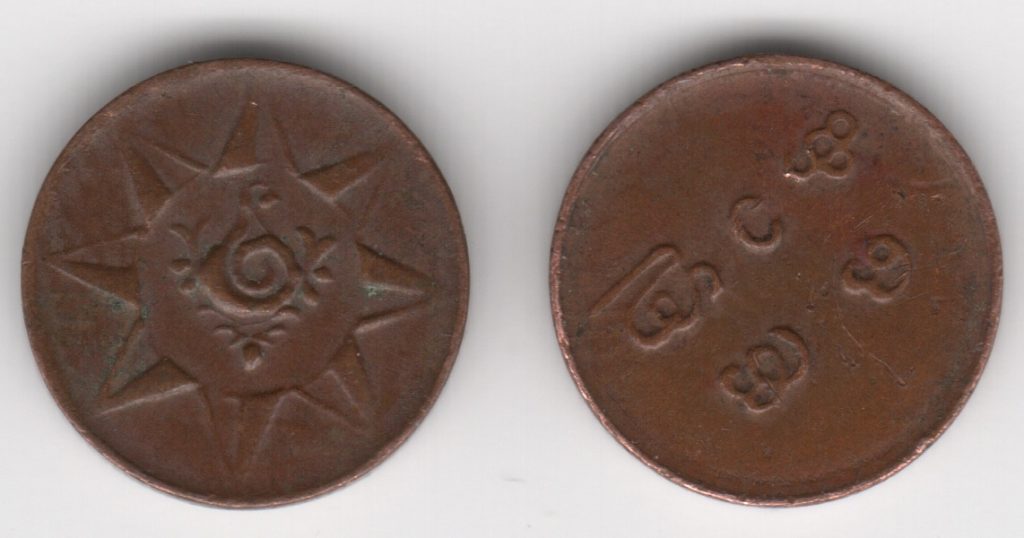 The coin is from the Princely State of Travancore. It was located in the southwest of the Indian subcontinent. Travancore became its own state in 1729 when it passed under Muslim control. Its economy was driven by making an alliance with the East India Company to freely use its ports for trade. Because of this arrangement, Travancore was never a part of the British Empire and continued to remain independent until 1949 when India was united as one country.

Only two rulers issued coins in the State. Rama Varma VI lead from 1885 through 1924 and Bala Rama Varma II ruled from 1924 through the end of the kingdom in 1949. Coins were issued by the kingdom to make up for lost revenues when the British became distracted by other world events.

Regardless of which version of the coin, it is a “ONE CASH” coin made of copper. The obverse is a sankha (conch shell) in an 8-pointed star with the reverse reading “Onu Kasu’ (one cash).

According to the SCWC, KM #57 was struck on a thin planchet that measures .8 mm. After making sure that my digital caliper can measure 1 mm, using a piece of metal that is 1 mm thick, I would be reasonably certain I could determine which coin I have.

Measuring both coins, the caliper read 1.02 mm giving evidence that this is the early version of the coin (KM #40)

Since I had the caliper out, I measured the diameter and found it to be 10.72 mm.

For fun, I had to determine whether it was smaller than the 1904 Panama 2½ Centesimos coin, better known as the Panama Pill. Previously, I wrote that the Panama Pill was 10 mm in diameter. After finding the coin and measuring it, it was 10.12 mm in diameter making it than a little more than a ½ of a millimeter smaller than the Travancore One Cash coin. 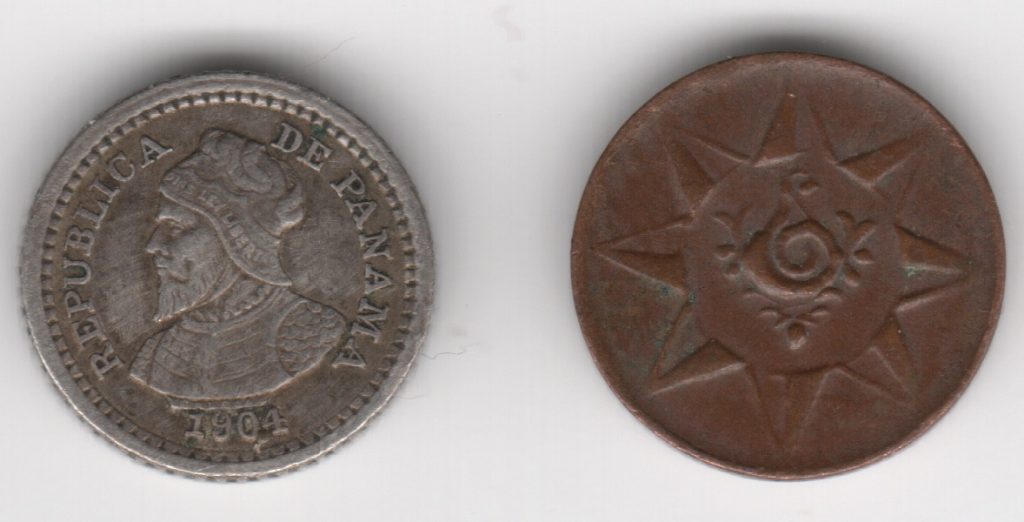 Travancore One Cash coin from the early 20th century versus the 1904 2½ Centesimos coin, better known as the Panama Pill.

On a quick look, it appears that the most common “small” coin size is 15 mm. Some are slightly larger but not many smaller. The only other coin I found is a British 1½ pence coin that was struck for Ceylon, British Guiana, British West Indies and Mauritius that is 12 mm in diameter, I cannot find any smaller.

If anyone knows of smaller coins, please let me know.