Following the introduction of the Presidential $1 Coin program and the discussion about replacing the Federal Reserve Note with a coin, I wrote an article explaining how the situation will not change. Not much has changed in 10 years! 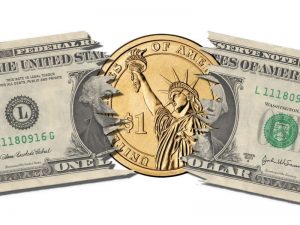 Whenever a proposal or law that creates a new dollar coin, there is always a discussion as to how to make the program more successful. In the past, the Gallup organization has polled the public on a few occasions asking about the potential acceptance of dollar coins.

Regardless of the questions asked, the only way to increase the circulation of the dollar coin is to stop printing the one-dollar Federal Reserve Note and begin to withhold it from circulation. It is a move that will force the people to use the coin as the population of the paper currency is reduced.

There are many emotional arguments on both sides of the issue. Whether one is for or against the printing of the one-dollar note, the US is one of the extreme few first-world countries issue its unit currency on paper. Looking beyond the emotional arguments, each side has dominant arguments to support their positions.

Those who want to eliminate the one-dollar note use at the cost of is production and the savings to the government as the dominant reasons. According to the Bureau of Engraving and Printing, 95-percent of all Federal Reserve Note printed for circulation are used to replace damaged and worn notes that are being taken out of circulation. Using BEP’s 2017 production report, 2,425,600,000 one-dollar notes were printed. With 95-percent being replacement notes, 2,304,320,000 notes were printed just to maintain circulation levels. With it costing 4.385-cents to produce one note of any denomination, the cost to just replace notes removed from circulation was $100,422,265.60 in 2017.

Rather than printing paper dollars, if the US Mint strikes coins the cost to replace those 2.4 billion notes would cost 21-cents per coin (according to the U.S. Mint’s 2014 Annual Report, the last documenting seigniorage for the dollar coin). The total production cost would be $483,907,200.

But do not let the 381-percent increase in cost fool you. For the real picture, the costs have to be predicted over time. According to the BEP and the Federal Reserve, the lifespan of a one-dollar Federal Reserve Note is 5.8 years. When the U.S. Mint makes plans for circulating coinage, they accept that the lifespan of a coin is 30-years. To help with the calculation, it will be assumed that the price of manufacturing coins and currency s will stay constant. In order to keep the $2.4 billion of one dollar notes in circulation for 30 years, it will cost the BEP $522.6 million dollars.

By comparison, since the U.S. Mint will be striking new coins for circulation and (theoretically) not replacement coins (not including the coins already in storage), the U.S. government would save about $117 million over 30 years. The following table illustrates these costs:

While this might be a compelling argument to stop printing one dollar notes, such a move has political ramifications for some powerful members of Congress. With over 1500 people working in the Eastern Currency Facility in downtown Washington, DC, they are represented by several leaders of both parties. When it comes to jobs in their districts, members of Congress will not allow anything that will reduce the production capacity of the Bureau of Engraving and Printing and where constituents could lose jobs.

Before Congress changes the law to stop the printing of the one-dollar note (31 U.S.C. §5115(a)(2)), the BEP will have to supplement production in order to protect jobs. The way this could be done would be to print foreign currency. However, it seems that the BEP is having problems selling their services to foreign governments.

Although the Bureau of Engraving and Printing has experimented with polymer notes and other printing substrates, the Federal Reserve has said that it does not consider these alternatives viable for United States currency. However, the Federal Reserve and Bureau of Engraving and Printing has been testing rag-based paper from companies that can produce new anti-counterfeiting features.

If there was a change to the supplier of currency paper, that would raise concern by the Massachusetts congressional delegation whose constituents include Crane Currency, the subsidiary of Crane & Company. Crane has been the exclusive supplier of currency paper to BEP since 1879. Although BEP has tried to open the competition for purchasing currency paper (see GAO Report GAO-05-368 [PDF]), the cost of entry into the market has prevented other manufacturers from competing for the business. If BEP would stop printing over 2 million one dollar notes without replacing it with similar paper production, the Massachusetts-based company could lose significant business.