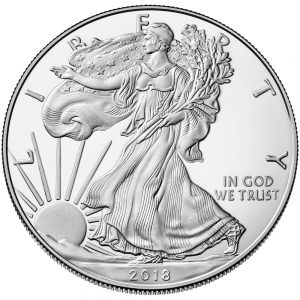 Each week I look at the news from the week in order to highlight something interesting. With the holiday season upon us, I was hoping to find something nice to write about. Instead, Kitco’s story about the increasing sales of silver and a marketplace that is now moving is more concerning than positive.

Precious metals are the investment of last resort. While some portfolios will diversify into metals for a safe haven, metals become active when there is uncertainty in the market. The trade wars between the United States and China have caused market players to reduce their risk by investing in silver.

Although most prefer gold, silver has been the metal of choice for the Chinese for hundreds of years. It has been the benchmark of their trade and the basis for their monetary system prior to all countries moving off precious metals standards. It was the basis of trade that the United States thought would be resolved by creating the Trade Dollar coin in 1873.

The rise in silver sales from the U.S. Mint is good in that it will increase seigniorage. It is not so good in that it indicates there is the potential for the markets to change course. Markets hate uncertainty and this could be their answer to the uncertainty brewing in trade between China and the United States.

Currencies / Fiat Currency The first gold coins appeared around 560 B.C. Over time it became a practice to store larger amounts of gold in warehouses.

Why are we stubbornly holding on to a coin that is almost useless?

Inmates in a Bulgarian prison were in for a shock when they stumbled across an enormous hoard of silver coins from the Ottoman Empire. The incredible haul was discovered alongside two broken treasure pots in a prison in the Bulgarian city of Pleven.

The National Bank of Romania (BNR) has put into circulation, for numismatic purposes, a commemorative collector banknote with face value of lei 100 dedicated to the anniversary of 100 years since the Great Union on December 1, 1918.

Correcton:The U.S. Mint provided incorrect information on its website Monday morning, misstating the number of ounces sold in December. In an update of its sales data the U.S.

Rare gold coins and a golden earring have been discovered in the ancient Mediterranean port of Caesarea in northern Israel—possibly left and never recovered as Crusaders conquered the area 900 years ago.

It was 150 years ago this month when one of Nevada's most treasured artifacts first arrived in Carson City.

Numismatics, it's worth some coin

Lianna Spurrier has the tooth fairy to thank for a hobby that transformed into sudden job opportunities.&nbsp;

Part 1 Carson Mint: A new mint for the new state of Nevada

This article first appeared in the Nevada Appeal on July 20, 2014. Abe Curry received papers on July 16, 1866, approving the start of construction on the Carson Mint.On