It has been eight months since I opened my shop of treasures. While I have had fun most of the time one thing that has not happened is a good cash draw find. That is until recently. 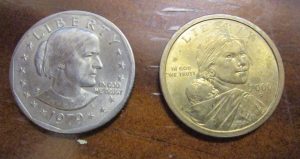 This past week, a customer bought a small item and paid for the under $3 purchase with three coins, a 1979-P Susan B Anthony Dollar, two 2000-P Sacagawea dollars. Of course, given the past problems with confusing a Susie B for a quarter, I took an extra glance at the coin to make sure.

I think the patron was surprised I took the coins without question. I threw the coins in the far left slot and counted out his change. With a quick tear of the receipt and a nod, I thanked the customer for his business and he left.

Later, I was telling someone about the transaction and was told the customer was testing me. Apparently, some people use dollar coins, half dollars and two dollars bills to test the store to see if the store knows enough to take the coins. I was told that the “pass rate” for this test is under 20-percent. I guess I passed!

Earlier today, I passed one of the Sacagawea dollars out for change. 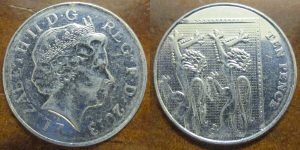 After hours, when it is time to close the books on the day, I was counting the change in the quarter bin and saw something odd. It was the size of a quarter but shinier. The U.S. Mint does not strike circulation coins this shiny. A closer look revealed that it is a 2013 British ten pence coin.

It’s a cool find and worth 13-cents, but what is it doing in my cash drawer?

I cannot blame anyone because my assistant was not in and I was the only one operating the cash register. I didn’t open a roll taking the blame off the bank. No, this is my fault and I lost 12-cents on the transaction!

I thought I would find a loose Canadian cent or a Jamaican penny mixed in with the copper. Nope! Apparently, I didn’t pay enough attention and was handed 10 pence.

After counting the coins, I replaced the British coin with a U.S. quarter that was in my pocket. My drawer balances but now I have my own lesson to pay attention!