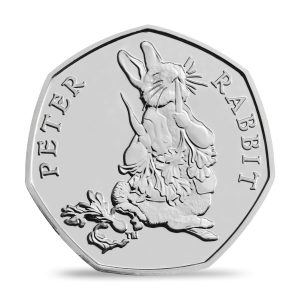 One of the most disturbing stories relating to numismatics is the conviction of a man for killing someone for his coin collection. In Colchester, England, Gordin McGhee, 52, was stabbed in his flat by Danny Bostock, 33, who broke in to steal a set of Beatrix Potter 50 pence coins.

Both men were familiar with each other from local coin club meetings.

Over the last few years, the English tabloids have been publishing stories about how low-mintage, modern circulating 50p commemorative coins were being sold for hundreds or thousands of pounds on eBay. This has awakened the public about the potential for collecting these coins.

The Royal Mint has been producing 50p coins commemorating the animals featured in Beatrix Potter’s stories since 2016 including Peter Rabbit. By the time the country caught on to their value, the limited edition 2016 and 2017 coins were being hoarded and becoming more difficult to find. People who wanted a complete collection turned to the secondary market.

Of course, where there is a demand the person who can provide a supply can make money.

According to news reports, Bostock snuck into McGhee’s flat to steal his collection of Beatrix Potter coins while McGhee was not home. Unfortunately, McGhee returned home and found Bostock in the act. Bostock stabbed McGhee 17 times and tried to set the place on fire to cover up the crime.

Police were able to track the trail of blood Bostock made with his shoes to Bostock’s home. Bostock was convicted after using the defense that someone else wore his shoes after a drinking party even though the police found the shoes, coins, and the murder weapon in his possession.

Although this type of situation may not happen over the National Parks quarters, we did see the greed of dealers put the public in danger for the release of the 2014 50th Anniversary Kennedy Half-Dollar Gold Proof Coin. Dealers handed out cash to needy people who did not conduct themselves in a manner that is consistent with the ANA Code of Ethics so they could buy the coins first without having to worry about U.S. Mint purchasing limits.

In this case, nothing happened to the dealers who should have been dealt with by the ANA. They could have lost money since the release was not a sellout and the price of gold dropped, but we will never know.

There’s been a mysterious surge in $100 bills in circulation, possibly linked to global corruption

The demand for U.S. cash is skyrocketing — an indicator that’s leaving some economists sounding the alarm.

Charlotte is known for its banks but in some circles, it's known for its actual money. The gold coins that Charlotte's mint produced in the mid-19th century are desirable. "When you're a coin collector, you don't worry sometimes the value.

Before immigrating to the United States in 2001, Paul Balan worked as a painter and sculptor in his native Philippines. Now he is pushing his artistic talents in new directions, doing coin and medal designs for the U.S.

Last August, 90-year-old pensioner Miroslav Jurníček harvested onions from his garden, when he noticed a small golden coin lying on the ground. He started rummaging around and eventually unearthed a vessel full of gold and silver coins.

A coin enthusiast has been convicted of murder after stabbing a fellow collector 17 times while trying to steal a rare set of Beatrix Potter 50ps. Danny Bostock, 33, attacked 52-year-old Gordon McGhee in his bedroom before turning on the gas cooker and lighting a dishcloth, seemingly to cause an explosion and destroy evidence of the killing.

From Kew Gardens to Paddington bear, there are a number of rare and collectible 50p coins and the Royal Mint will be releasing a Stephen Hawking coin later this month. The late Cambridge University physics professor died in March last year and the coin will feature a black hole and the scientist himself.