Aussies to Release Apollo 11 Commemorative with US Half

While perusing my Twitter feed, I found the announcement from the Royal Australian Mint is beginning the presale of the two-coin set honoring the 50th Anniversary of Apollo 11.

The Australian coin has an interesting design. On the obverse, the Royal Australian Mint reduced the size of Queen Elizabeth II’s effigy on the obverse and filled the side with an image of the moon, a radio telescope representing the CSIRO Parkes Observatory, and a part of the transcript of the Apollo 11 mission. The CSIRO Parkes Observatory was one of the ground tracking stations that helped NASA communicate with the Apollo 11 crew.

The reverse features a stylized scene from the moon landing with a color image of the earth positioned in a way to make Australia facing the virtual camera. 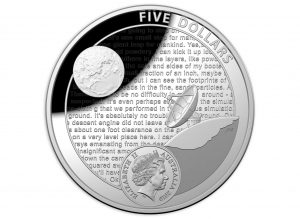 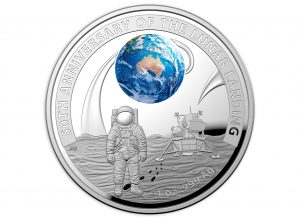 The Australian $5 silver coin can only be purchased in this set and has a mintage limit of 10,000 coins. Thus, it is safe to assume that there will be a limit of 10,000 of these sets.

There is also a gold coin and a six-coin uncirculated set that features copper-nickel base coins and aluminum-bromide one- and two-dollar coins. These coins feature different reverse designs than their precious metals counterparts. The obverse features the effigy of Queen Elizabeth II by Ian Rank Bodley.

Coins ordered now will be shipped starting on June 5, 2019.

The Royal Australian Mint has not (yet) provided information if there will be a special program for shipping to the United States or if they will partner with the U.S. Mint to sell the set.

If you are thinking about ordering you might want to watch the currency markets. There has been a decline in the value of the Australian Dollar (AUD) versus the U.S. Dollar since the beginning of April. Although markets are difficult to time, a fluctuation of 5-percent in the prices is not going to make a big difference.

Aside from waiting for answers to my questions from the Royal Australian Mint, I will watch the markets for the next two weeks to see if I can save money if the AUD dips below 60-cents to the USD.