Not Everyone Likes Old Change 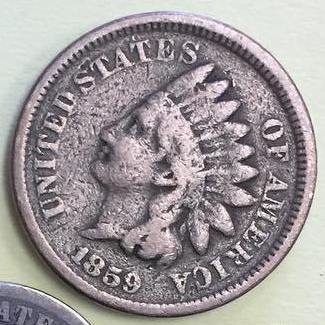 With most of the roll of 1957-D very red Lincoln cents still in my cash register’s draw and the quarter bin even half-full of uncirculated bicentennial quarters, I thought that most of the more expensive and interesting coins made it into circulation. That was not the case.

A new customer came into the shop and found a few items she wanted to purchase. After selecting a few things, she left to find an ATM because, she said, that she does not like using credit or debit cards. As a reseller of estate and other used items, this is a common practice for many purchases under $100. It is a typical scenario.

After paying for her purchase, she saw that I had given her two very shiny Lincoln cent and one with a beautiful brown color. Except it was not a Lincoln cent. It was an 1859 Indian Head cent that was left over from National Coin Week.

I had included two 1859 Indian Head cents in the draw. This coin was the second that survived National Coin Week. Depending on how you look at the coin, it could grade VG-F making it worth about $15-20.

When she looked at the coin what was different in her hand, she asked what it was. After I explained what it was, she accused me of giving her a counterfeit coin. She insisted it was not real and that I was trying to cheat her.

I walked over to the shelf and grabbed a new copy of the Red Book to show her that it is a real coin and that it has value. But she was not impressed insisting that was scamming her with stuff I did not know. Even after pointing to my name in the list of contributors she would not back down.

Finally, I agreed to change the coin.

As I put the coin back into the cash register drawer and replaced it with one of the 1957-D cents, she stopped me and said that I told her the coin is worth $15-20 and she wanted $20. I reminded her that she thought the coin was bogus, so why should I pay for a fake coin?

After handing her another coin, she looked at it and noticed the wheat ears reverse. While accusing me of trying to cheat her, she asked why am I giving away “phony money?”

I explained that the coin was a bit more modern even though it is a little older than me. Its value is about $5-6. She looked at the coin and compared it to the coins in her purse, ignoring the fact that I had given her two of them earlier.

“The back is funny. Why is the back funny?” she asked.

While explaining about the design and the changes made to the coin, I search the change draw then my pocket for a more modern coin. She gave the 1957-D back, and I replaced it with a brown Memorial-back cent I found in my pocket.

Happy that she has recognizable money, she walked out threatening to call the police. As I held the door for her, I said that she should contact the U.S. Secret Service because they are responsible for dealing with counterfeiters.

I wished her a good afternoon.

My new and former customer left without saying another word.