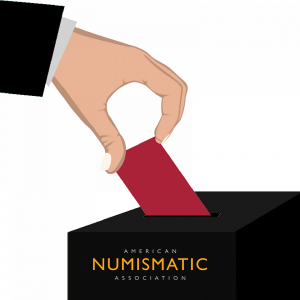 The countdown to the July 1 deadline to vote for the next American Numismatic Association Board of Governors approaches, it is time to look at the candidates and determine who can best lead the organization forward.

For the first time in many years, there are races for President, Vice President, and Board of Governors. This year this is a choice. Here are my choices:

Ellsworth is currently a member of the ANA Board of governors and the owner of Butternut Coin Company, which moved from Virginia to Tennessee. Ellsworth has been around but has many strong opinions that have irritated several of the ANA’s constituency. Recently, during the National Money Show, Ellsworth made statements that exhibitors and the exhibit committee interpreted as hostile to them. Unfortunately, when he had the opportunity to clarify his position, his tone turned combative while making accusations of there being a clique amongst the exhibitor community.

Kagin grew up in the numismatics business, the son of a very prominent member of the ANA. But Kagin is not without his issues. He was a member of the Board of Governors during the fiasco with Executive Director and Legal Counsel Christopher Cipoletti in 2007. Then there were the Larry Shepherd issues that led to more embarrassment. For the subsequent election, Kagin said that he and the Board made mistakes and he wanted another chance. Kagin lost the election during a “throw the bums out” feelings by the membership.

Over the last few years, it appears that Kagin has learned from his mistakes. Sometimes it takes falling on your behind to be able to learn from those mistakes. It also seems that his vision for the ANA has matured since his return to the Board.

The Coin Collectors Blog endorses Don Kagin for ANA President for his sober vision and less combative personality, which is necessary for the ANA.

The race for ANA Vice President is between Dr. Ralph W. Ross and Thomas J. Uram.

Although I have briefly met both gentlemen, I cannot say that I have had an extensive conversation with either. The personality dynamics are very different. Although that should not be a determining factor, the differences make it a consideration.

Ross has been a member of the Board of Governors for some time. He is a teacher by trade, which can be beneficial to figure out how to spread the word about numismatics beyond the ANA. In reality, where has he been? In my interaction with the Board, Ross is its quietest member. We do not hear much from him or about him regarding his position on the Board. He is just there.

Uram has been an active participant for some time. He is an exhibitor, judge, and has acted as a coach to exhibitors. Having someone on the Board who understands the exhibitor community may be good for the ANA.

Uram is not a professional numismatist but has had a long career in the financial services industry. Given the ANA’s propensity for having consistent financial problems, having someone around who can make sure the ANA stays fiscally stable may be a good idea.

Finally, Uram is a member of the Citizens Coinage Advisory Committee (CCAC) as an appointee of the Secretary of the Treasury. Although I have been a critic of the CCAC and not a fan of the Secretary, having someone with that type of experience could have its advantages.

Therefore, the Coin Collectors Blog endorses Tom Uram to be the next Vice President of the ANA.

There are ten candidates to fill seven seats. Three people will not be serving on the Board. I will not comment on every one of the candidates in this space. I will provide some thoughts on what has gone into my decision.

First, I do not endorse Mike Ellis and his return to the Board. Although I believe in second chances, some have to come with a significant amount of contrition and time. It has not been long enough after “he had made a mistake and chose to step down from the board.” Any person who had to step down from the Board of Governors because of “mistake” must be required to jump a higher hurdle to return. I am still waiting for the jump.

While I have nothing against Greg Lyon, this would be his sixth and final term on the Board. After ten years as a member of the Board of Governors, it is time to step aside and allow new people into leadership.

There are endorsement forthcoming for Muriel Eymery and Shanna Schmidt. Eymery, who is from London, would bring a very different perspective to the ANA that is very necessary. Her view on foreign collectors and the world of numismatics outside of the United States would be an asset to an organization that appears insular. This type of diversity would benefit the ANA.

Schmidt is a dealer with a specialty in ancient numismatics and has a background beyond numismatics. Aside from adding diversity to the Board of Governors, which is very necessary, the line in her biography that attracted me was that her “master’s thesis was on the cultural-property debate as it relates specifically to ancient coins.” It is a topic that I have commented on several times and wish the ANA would involve itself with on behalf of the numismatic community.

Based on the considerations, the Coin Collectors Blog endorses the following seven candidates for the ANA Board of Governors (in alphabetical order by last name): Rick Ewing, Muriel Eymery, John Highfill, Cliff Mishler, Paul Montgomery, Robert Oberth, and Shanna Schmidt.

If you are an ANA member, go vote!

If you are not an ANA member, you should consider becoming one!