This one is just for fun. 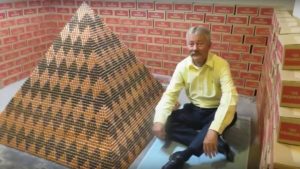 In an interview with CBC Radio, Nelson said that after building a coin pyramid with 41,000 coins on his desk, his coworkers asked if it was the world’s largest. He said that if it were not, he would make sure it is.

According to the Guinness World Records, the record was 1,000,935 Lithuanian one-cent coin by Vytautas Jakštas and Domas Jokubauskis. The pair built their coin pyramid in 2014 using Lithuanian Litas as a celebration before Lithuania converted to the Euro.

After three years of work on it for 20 hours per week, 45 YouTube videos tracking his work, and 1,030,315 Lincoln cents later (that is $10,303.15 worth of coins), Nelson submitted his creation to become the world records holder. It will take a while for GWR to verify the record.