During a ceremony at the Naismith Memorial Basketball Hall of Fame in Springfield, Massachusetts on September 6, the U.S. Mint unveiled the design for the 2020 Hall of Fame commemorative coin.

The obverse of the coin, designed by Artistic Infusion Program artist Pheobe Hemphill, has an image looking down into the net from the rim. Superimposed on above the rim are three players: a man, woman, and wheelchair player, reaching for a ball. 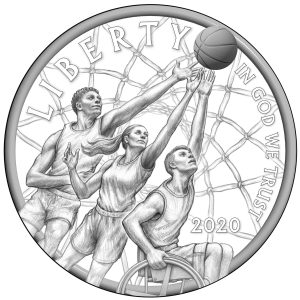 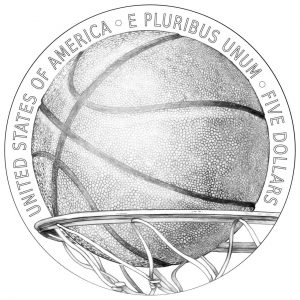 The reverse of the curved coin, designed by Artistic Infusion Program artist Justin Kunz, the image of a basketball as it is about to drop into the basket. While using the image of a ball is similar to what the U.S. Mint used for the 2014 Baseball Hall of Fame Commemorative Coin, this one is a little different. For this commemorative coin, the ball does not take up the entire side, leaving a distinct rim around the ball. Also, the ball will be on the concave side of the coin.

Line drawings of coin designs do not provide the perspective of the final product, making it difficult to judge. The design unveiled in Springfield appears to have a lot of potentials. Let’s hope that the final product can be just as nice.

Although U.S. Mint Director David Ryder once mentioned something about selective coloring on this coin, there has been no formal announcement from the U.S. Mint.

A video of the ceremony is available on the NBA’s website.