Would You Encase a Lincoln or an Almond

Two weeks ago, my crew and I emptied a 20×10 storage room. The co-owner was a picker and a dealer who had been buying and selling for many years. I met his former partner at the storage facility with a large rental truck to move everything to my warehouse.

Before leaving the storage facility, boxes filled the entire truck about two-thirds of the way high. It is our largest consignment.

In those boxes are political memorabilia, Star Trek collectibles, collectible plates, antique photos, newspapers, other memorabilia, posters, and so much more. We are creating an inventory so that they can be sold at auction.

Amongst the campaign material for many different candidates, both winners and losers, we found medals and other numismatic-related items associated with candidates.

We found a few inaugural medals, which I expected, but I also found many other numismatic-related items that I want to share. 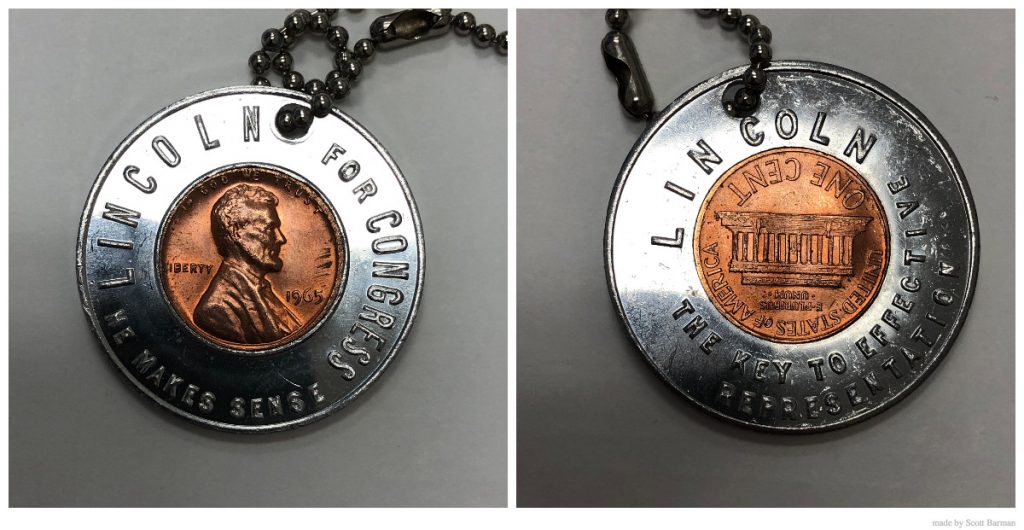 The item of today is an encased 1965 Lincoln Cent with a chain through a hole to make it into a key ring. On the obverse of the aluminum ring, it reads, “Lincoln for Congress / He Makes Sense.” On the reverse, the ring says, “Lincoln / The Key To Effective Representation.”

I found hundreds of these coins in plastic bags! All were the same, including the uncirculated 1965 Lincoln Cent.

Who was this person and did he or she win their election?

After searching records from congressional elections from 1966-1976, the only Lincoln that ran for congress is Lincoln Almond. Almond, a Republican from Rhode Island, ran for Rhode Island’s First District seat against the incumbent Fernand St. Germain in 1968. St. Germain won the election with 60.4% of the vote.

Almond later was appointed by Nixon and Ford to be the U.S. Attorney for the District of Rhode Island (1969-78) then again by Reagan and Bush (1981-1993). Almond ran for governor of Rhode Island in 1978 but lost in the primaries. He was more successful when he was elected governor in 1994.

As I type this, I began to think that basing a campaign on his first name was a good idea. Otherwise, that would be nuts! (insert rim-shot here)