I like the idea of Privy Marks on US Coins

Hey, Coin Collectors Blog fans. I’m back! I have made several changes in my business to do more with less. These changes will give me more time to extend my numismatic writing. I have a backlog of issues and interests I want to talk about and will start to add content. Stay tuned. For now, here is something that I have been discussing with a few people via email. 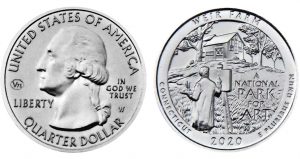 I have received a lot of emails about the U.S. Mint, who will be adding a privy mark to the 2020-W quarter. Although the reaction is mixed, more people seem to be against the move than being in favor.

Amongst the comments are “it is a gimmick,” “beneath the stature of the mint,” and “it’s ugly.” Some have admitted to not collecting or caring about modern coins. Others are regular critics of the U.S. Mint.

There is also a group of people with a pedantic image of the alleged integrity of the U.S. Mint. The same organization that has allowed the release of many patterns are a source of error coins available to the public, and one that has contradictory policies by attacking those with 1933 double eagles while doing nothing about the 1913 Liberty Head Nickels.

When it comes to the U.S. Mint’s policy history, it is as sketchy as any U.S. government agency. The difference is that its products have fans that will defend it because of the final results and not the process that came before it.

Since the U.S. Mint has legal restrictions as to what they can do when it comes to striking coins, I applaud whoever made this decision. We should be celebrating the end of World War II. Even though I was not alive at that time, we need to honor the sacrifice many Americans gave to ending totalitarianism and preventing an evil takeover of the world.

The U.S. Mint found a way to honor the 75th anniversary of the end of World War II without violating the law. I can’t wait to try to find these quarters in my change—or buy them from a dealer since I have had no luck finding W mint marked quarters in my pocket change.