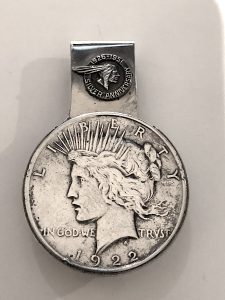 Now that some of us have a little time on our hands, why not think about how you can have fun with your collection. After all, there is more to collecting coins by types or date sets. Sometimes you need to think outside the folder and album and find something different.

If you look above the Peace Dollar is the Indian Chief emblem of Pontiac, the former automobile division of General Motors. The emblem celebrates the silver anniversary, 25 years, of the Pontiac Motor Division. 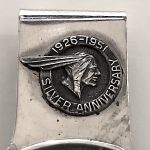 GM introduced Pontiac as a companion marque nameplate to the Oakland Motor Division in 1926. Oakland managed Pontiac to sell cars at a lower price point than other Oakland manufactured vehicles. By 1929, Pontiac became more popular than Oakland, which led to Oakland’s closure in 1931 during the Great Depression.

Ironically, Pontiac would meet the same fate during the Great Recession. To meet the demands of regulators for accepting a $25 billion federal government loan, GM agreed to close Pontiac and Saturn, sell Saab, and close or sell Hummer as part of the restructuring. Like Oakland, Pontiac is now part of automaking lore.

The 1951 Pontiac Chieftain was a popular car. The Chieftain was available as a sedan, sedan coupe, business coupe, and deluxe convertible coupe. In 1950, Pontiac introduced the Catalina coupe that became a popular option that, in 1959, the Catalina succeeded the Chieftain as a model. The cars sold at the right price point for the burgeoning middle class of the post-war United States.

Turn over the money clip, and aside from seeing the reverse of the Peace Dollar, the clip is engraved, “Jack Blank Says Dollar for Dollar You can’t Beat a Pontiac.” 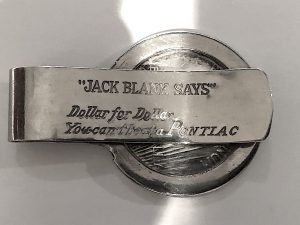 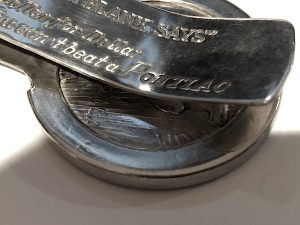 Jack Blank Pontiac was located at 1437 Irving Street, NW, in Washington DC. Jack Blank (1901-1980) founded Arcade Pontiac in 1937. In 1951, he renamed the dealership after buying out his partners. Blank retired as company president in 1969.

Blank was a prolific promotor. Aside from buying the rights to be the “Official Car Dealership of the Washington Redskins,” Blank created a lot of promotional items. Numismatically, collectors can find a 1964 encased cent with the dealership’s name and address. The money clip was a one-year promotion.

Blank died in 1980. The last records of the dealership were advertising in 1992 publications.

One collectible satisfies three interests. Numismatically, it is a Peace Dollar. I love the Peace Dollar. Even though this dollar was polished and is glued into an enclosure, it is still a silver dollar.

It is an advertising piece for a vintage car. My two favorite car eras are the muscle cars of the mid-1960s to the early 1970s and the cars of the art deco era. The Chieftain would be redesigned in later years, but it retains the art deco look I like.

Finally, it is part of Washington, DC history that has nothing to do with the government.

It is your turn to go out and find something that will satisfy you numismatically and other interests!