Desktop Treasure Hunt Leads to a Walk Down Memory Lane 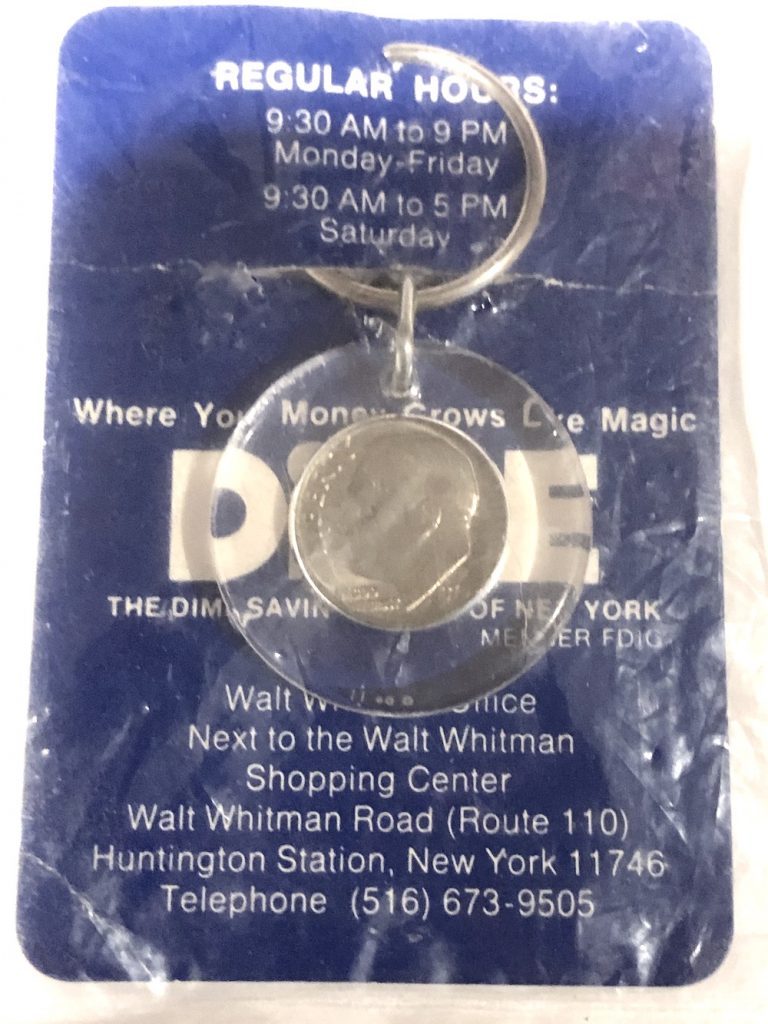 I am sure I am not the only one whose desk looks like it could be declared a disaster. My desk is so bad that during a recent recon mission, I found books about information security. It has been over three years since I retired from that industry.

A side effect of the mess is while digging under the piles, I can find coins and collectibles I forgot I had. It’s a make-my-own treasure hunt.

The picture to the right is a recent find. It was a giveaway from the Dime Savings Bank from a branch in Huntington Station, Long Island. It is a 1972 Roosevelt Dime encased in clear plastic attached to a keyring. The encased dime is attached to a card and wrapped in the original plastic.

I found this coin in the 1990s during a trip to Long Island. It was likely purchased from an estate sale not too far from the branch. It must have fallen out of a nearby box that holds my New York numismatic collection. It’s the box that I have been thinking about organizing for years.

Finding it brings back memories.

As a right of passage for Baby Boomers born in Brooklyn, our parents helped us open passbook savings account at the Dime Savings Bank. Founded in the Williamsburg section of Brooklyn, the Dime was as part of life as stickball. Even after moving to Long Island, we kept our accounts with Dime.

If you are too young to know about passbook savings, it was a savings account where your account activity was recorded in a passbook that resembled a passport. When you deposited or withdrew money, you handed the teller your passbook. The teller would put the book in a machine that would print the transaction on the pages. Every three months, an extra entry would be added for the interest payment. Before I understood the concept of savings account interest, I thought the bank was giving me free money.

I would deposit parts of my allowance and the payment for odd jobs around the neighborhood. When I was old enough, I started to deliver Newsday after school when it was an afternoon newspaper. When the deposits passed $100 in savings, I thought that I was rich.

Every week, I would knock on the doors where I delivered the paper to collect money for the newspaper. One day, someone paid for their delivery by including ten copper coins that I did not recognize. I showed them to my father, who told me they were Indian Head cents.

I did not know these coins existed. So I dumped the coins in my pocket on the floor and started to sort through them. I started to separate the coins by type and date, laying them across the floor. My mother did not like my collecting style, so my father bought my first Lincoln cent folder and a Red Book. I still own my first blue folders.

The deposits began to change. I no longer deposited the coins. I was too fascinated with them to let them go. Slowly I began to build a collection out of pocket change while the currency was deposited in the bank. I also accumulated more blue folders.

Then my father did something that changed everything. He took me to a coin store. Suddenly, the Roosevelt dime collection was nearing completion. The blue folder for the dimes was replaced by a blue deluxe album. I was addicted!

The deposits also began to reduce. Somewhat similar to today but on a different scale!

Passbook savings programs are a relic of the past. The Dime Savings Bank is now called the Dime Community Bank. And I got to relive this memory because I found a one-time giveaway buried under a pile on my desk.