Celebrating 100 Years of Fixing a Mistake 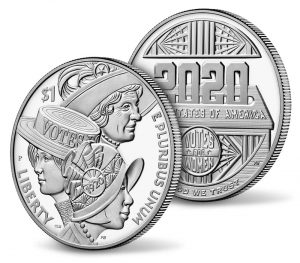 On August 18, 1920, Tennessee became the 36th state to ratify the 19th Amendment to the United States Constitution. After a battle in the Tennessee House, which was lead by an anti-suffragist leader, two members changed their votes at the last minute.

Although people in the United States tout the “right to vote,” suffrage has been a long and difficult fight since before the signing of the Constitution. It did not end with the 19th Amendment as its text did not eliminate the discrimination based on race.

The fight for the “right” continues today. Reduced access to polls, including the closing of precincts in minority districts and hindering the Postal Service’s ability to handle ballots, infringe on everyone’s suffrage rights.

The commemorative coin reflects the history of the movement by depicting women wearing different hat styles during the thick of the fight. The movement started to gain momentum in the 1870s when states and territories in the West allowed women to vote. The first attempt to pass an amendment for suffrage began in 1878, where the depiction of the commemorative coin begins.

On the reverse is a depiction of a ballot box. The box has an art deco design with the centennial anniversary year looming large as it is descending into the ballot box.

The coin was designed by Christina Hess, a member of the Artistic Infusion Program and sculpted by Phebe Hemphill. The dollar coin is .999 silver with a mintage limit of 400,000. The sale of each coin includes a $10 surcharge paid to the Smithsonian Institution’s American Women’s History Initiative.

It is an excellent design to depict the 100th Anniversary of the ratification of the 19th Amendment. Although I am not a collector of commemorative coins, this may be one that I will add to the coins I collect because the design is worthy of collecting.