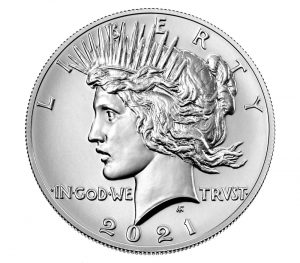 There continues to be a disconnect between the U.S. Mint and the collecting community. First, they announce the availability of the 2021 Morgan and Peace dollar coins with a household limit of 25 coins. Then, claiming they heard collectors, they lower the household limit to 10 coins.

What everyone missed in the announcement is the obnoxiously low mintage limits for these coins. Since the legislation does not specify mintage limits, why is the U.S. Mint limiting the number of coins they are selling? It does not take a professional market analyst to note that the limits will drive profiteering against the collector community. If they need a recent example, look at the 2021-W American Silver Eagle Proof Original Reverse coins.

News watchers may have noticed mainstream news outlets wrote a few more stories about National Coin Week than in the past. The stories included something about the 2021 dollar coins, whether it was the Morgan and Peace tributes or the innovation dollar.

The free offer for Gold Membership to the ANA also ended on Saturday. The ANA will let me know next week how many took advantage of my offer. Although the advertising said that I would sponsor 25, I provided enough money to sponsor 50 new members. I hoped 50 people became ANA members this past week!

— Astronaut Sally Ride will be depicted on a U.S. coin looking out a spacecraft window at Earth, if the U.S. Secretary of the Treasury agrees with the recommendations made by two advisory panels for the design of quarter dollar to be issued in 2022.

→ Read more at collectspace.com
Coin Collectors News
news.coinsblog.ws
♦ The Royal Mint launches Alfred the Great commemorative coin honouring the military mastermind a millennium on from his accession (Apr 22, 2021)
♦ Whitman Publishing Announces New 2022-Edition ‘Official Blue Book of United States Coins’ (Apr 22, 2021)
If you like what you read, share, and show your support