Congress became quiet on the numismatic front in May. After a flurry of vanity bills introduced in March and April, the only bill to be introduced in May was to create a commemorative to raise money for the National World War II Memorial in Washington, D.C.

The National World War II Memorial opened in 2004 to a lot of acclaim for its design. Surrounding a reflecting pool are 56 granite pillars arranged in a semicircle. Each pillar has the name of the 48 states and eight territories at the time of the war. Two sides represent the two theaters of the war, the Atlantic and Pacific. 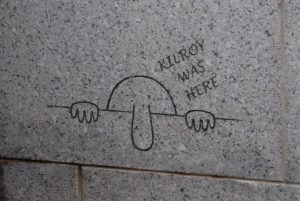 One of the “Kilroy was here” engravings on the WWII Memorial. (Source: Wikipedia)

On either side of the pool are victory arches to celebrate the victories in Europe and the Pacific. Hidden within the design are two “Kilroy was here” engravings. The phrase’s origin remains a mystery, but it was prevalent where ever U.S. troops were located.

The memorial is open 24 hours a day, and the National Parks Service does not charge admission fees to enter. The only money the NPS receives to maintain the memorial is from the budget process and donations. Neither is enough to prevent the deterioration caused by Washington weather extremes and the wear of visitors. Unfortunately, there has also been vandalism.

S. 1596: A bill to require the Secretary of the Treasury to mint coins in commemoration of the National World War II Memorial in Washington, DC, and for other purposes.