About the U.S. Mint’s Silver Shortage

This is the first article of three regarding the recent problems at the U.S. Mint. 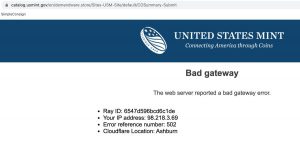 Economic analysts believe there is a silver shortage but that it is not critical. According to the supply chain reports, a sufficient supply of industrial silver for manufacturers to keep up with production. The reduction in computer chip production because of COVID-based plant shutdowns is the greatest threat to manufacturing.

Jewelry and other businesses that use silver for their beauty are experiencing a slowdown but not to the extent of the computer chip industry. The industry has been able to use recycled silver fueled by people cashing in their scrap silver. One silver refiner reports that they have more work than they can process.

Although manufacturers have silver to maintain production, the U.S. Mint announced on May 28, 2021, that “The global silver shortage has driven demand for many of our bullion and numismatic products to record heights.”

On June 2, the U.S. Mint clarified their statement by saying, “In a message released Friday, May 28, we made reference to a global shortage of silver. In more precise terms, the silver shortage being experienced by the United States Mint pertains only to the supply of silver blanks among suppliers to the U.S. Mint.”

Why is the U.S. Mint different from the other industries?

The short answer is that the U.S. Mint is just another government agency subject to federal law.

The U.S. Mint is required to buy silver mined in the United States within one year of its mining (31 U.S. Code §5132(a)(2)(D)). Under this law, the U.S. Mint cannot use recycled silver or silver that the government has not purchased from the mines.

The U.S. Mint discontinued assay operations shortly after the passage of the Coinage Act of 1964. Since then, the bureau has bought the metals from other manufacturers, either sheets or already formed planchets. When the American Eagle Program started, the law required the U.S. Mint to use the silver in the Strategic and Critical Materials Stockpile. The U.S. Mint manufactured the planchets in West Point.

When the program depleted the Strategic Stockpile, Congress updated the law to require the U.S. Mint to use freshly mined silver. They found that it was more cost-effective to have a commercial vendor manufacture the planchets.

Hiring a commercial vendor to do work for the federal government is different from a business-to-business transaction. The government requires all contracts and contractors to follow the Federal Acquisition Regulations (FAR) to purchase goods and services.

For the government to contract with any company, a bidding and vetting process can last from weeks to years. The agency has to produce requirements, selection criteria and evaluate the proposals, called source selection.

Congress purposely made the process challenging to promote fairness in the bidding process and ensure the government pays a fair price. Unfortunately, the process is expensive and fraught with problems.

For the U.S. Mint, the problem is that FAR does not allow the latitude to find alternate vendors when there are supply issues.

The U.S. Mint has contracts with four vendors to make silver planchets. They have vetted the contractors, their processes and have contractual quality control measures to ensure the planchets comply with the Treasury’s legal and quality requirements. If the vendors cannot fulfill the U.S. Mint’s order, the law prevents them from looking for immediate alternatives.

Where the U.S. Mint could have done better was to order the planchets sooner. The U.S. Mint reported that agency attorneys refused to allow their purchasers to order planchets before the law was signed. The bill, H.R. 6192, was sent to the president on December 24, 2020. The president signed the bill into law on January 5, 2021 (Public Law No. 116-286).

When a law is signed, the White House will tell the appropriate Departments. If that does not happen, the agencies receive notice from the Government Printing Office (GPO) who publishes the laws. Like everything else, the GPO has experienced interruptions because of pandemic protocols.

According to a government attorney that works for the Inspector General’s office in a non-Treasury department, agencies have the latitude to work on anticipated laws. An example cited is that the IRS works on drafting forms and regulations based on the bills in progress to be ready for the filing season.