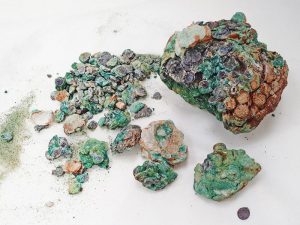 The ancient bundle of coins found on Habonim beach in Israel. (photo credit: OFIR HAYAT via The Jerusalem Post)

I regularly peruse online news sources looking for numismatic-related stories in non-numismatic media. The stories are not limited to geography or the news media. I find stories about numismatics on sites that cover news for different disciplines and industries.

Although I post a link to every story I read on Twitter, the stories I find the most interesting make it to the weekly post. Regular readers will notice that I find many stories about people finding ancient coins make the weekly post.

I do not collect ancient coins, but I am interested in their stories. Even though the concept of a minor was not offered when I went to college, I filled many of my electives with history and political science classes. So when I see stories about these discoveries, I read each article thoroughly. Most are very well written and include a context around the era that the coins are from.

Recently, a professor who teaches ancient history using coins to highlight his lectures said that much of what we know about rulers was learned from studying coins. He is excited about new finds because the coins could add to their knowledge of history.

While discussing the coin hoard unearthed in Israel, we discussed collecting ancient coins. He said that once the collector decides what to collect, they can compile a nice collection for the same amount of money as assembling a nice Mercury Dime collection.

An important suggestion was to buy ancient coins from a reputable dealer. It will prevent you from a claim that you have stolen cultural property by a foreign government. This is because the U.S. State Department Cultural Property Advisory Committee (CPAC) accepts any claim from any country without understanding how they hurt legitimate collectors. I have written many posts on this subject. Just search for ACCG (Ancient Coin Collectors Guild) to read those posts.

Even if you do not collect ancient coins, read the articles about the finds from around the world. The articles are fascinating and provide a look at the world’s collective history.

Israeli archaeologists working for the Israel Antiquities Authority (IAA) have discovered a Byzantine-era gold coin depicting Jesus’ Crucifixion. According to CBN News, the coin was one of several artifacts found during an excavation by Ramat Ha-Sharon, a city near Tel Aviv.

This summer, tour guide Yotam Dahan was camping with his family on a beach near the town of Atlit, Israel, when he stumbled onto a greenish metal mass made up of 13 pounds of ancient coins.

→ Read more at smithsonianmag.com
After the gold standard, we got bigger government and a smaller dollar

August marks the 50th anniversary of Richard Nixon’s infamous decision to “close the gold window,” reneging on the U.S. government’s pledge to redeem dollars for gold. Although Nixon’s action spelled the end of the postwar Bretton Woods framework, the system in place circa 1970 was a pale shadow of the original gold standard.

The King of American Coins just fetched a princely, world-record sum. The single finest example of the 1804 US silver dollar sold for an astonishing $7.68 million at a Stack’s Bowers Galleries auction on Tuesday to become the most expensive coin of its kind.

Madurai: Keeladi, with its rich storehouse of antiquities, has hogged the limelight, especially with the recent finding of a punch-marked silver coin dating back to the ancient Maurya dynasty. The silver coin was a hidden treasure with symbols of sun, flower and Nandi.