A cricket hopped into the grading room

Today marks the third weekend of the college football season. Sunday is the second weekend of the NFL season. Autumn begins on Wednesday, and there are 43 days until Halloween.

Want to celebrate Halloween in style? Why not bid on an encapsulated cricket! 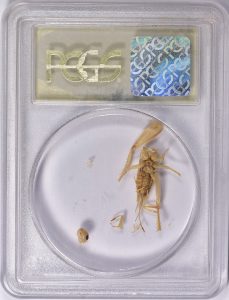 Up for bid at GreatCollection Auctions is a PCGS holder with the remains of a cricket. Yes, a real cricket.

According to GreatCollections, “back in the 1990s, there was a cricket disturbing the coin graders at PCGS, until one of them caught it and put it in a slab. It was then the subject at a high level meeting of graders where it was decided to give it to error expert Mr. Fred Weinberg.”

It was recently on display at the last World’s Fair of Money.

After more than 20 years, the carcass is a bit fragile. If nothing else, it proves that the slabs are not air-tight. If the slabs were air-tight, the carcass would not deteriorate.

Although the slab does not have a grade, the folks at GreatCollections said that they “would grade the cricket a solid MS-65 Full Head (Detached).”

What started as a joke is now a fun part of numismatic lore.

Here’s an interview from CoinWeek with Fred Weinberg talking about the “error”: