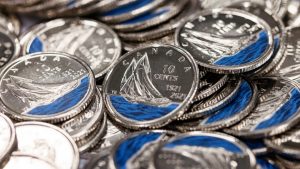 A few weeks ago, the Royal Mint published a survey that said British collectors love the new 50 pence series featuring childhood characters. The series has been attracting new collectors of the various 50p coins. They report increased sales in the colorized coins.

This week, the Royal Canadian Mint announced that they would issue a colored 10 cent coin to celebrate the 100th anniversary of the Bluenose. The Bluenose was a famous fishing schooner launched from Nova Scotia in 1921. Canadians nicknamed the vessel The Queen of the North Atlantic. An image of the Bluenose began its depiction on the Canadian 10-cent coin in 1937.

The dual-dated coin will include a splash of blue on the design that represents the water. The Royal Mint and Bank of Canada have begun circulating the coin this week.

Canadians do not have the same hangups about what constitutes a coin as their U.S. neighbors. Regular contacts report that Canadians welcome the new coins excitement. Many suspect people will pick the coins out of circulation as soon as they enter, similar to the red poppy and breast cancer awareness 25-cent coins.

Imagine the reaction if the U.S. Mint produced a colorized circulating coin?

Archaeologists from the Israel Antiques Authority (IAA) have excavated a hoard of silver coins from the Hasmonaean period in Modiin-Maccabim-Reut, Israel.

WASHINGTON – The U.S. Department of the Treasury has approved an image of former Principal Chief Wilma Mankiller with “a resolute gaze to the future” for the reverse side of a 2022 quarter as part of the U.S.

→ Read more at cherokeephoenix.org
Family’s amazement after one of first US coins found hidden in old sweet tin

A man was “completely amazed” to find one of the US’s first struck coins in a forgotten sweet tin. The Hon Wentworth Beaumont said he found the mid-17th century New England shilling in an old Barker and Dobson sweet tin at his father’s home among a collection of old coins.

The People’s Bank of China has launched a set of Panda precious metal coins, in celebration of the iconic Panda series’ fortieth anniversary on October 20. The range includes the first platinum Pandas to be released since 2005.

→ Read more at miningweekly.com
Victorian coin found under mast of Nelson’s flagship to go on display

Conservation workers have discovered a 127-year-old farthing which had been placed under the mast of Nelson’s flagship, HMS Victory, for good luck.

→ Read more at uk.news.yahoo.com
The Coins of the Provisional Government of Azad Hind

By Anil Dhir Bhubaneswar: Netaji Subhas Chandra Bose had declared the formation of the “Provisional Government of Free India” at Singapore on the 21st Oct 1943.

→ Read more at heritagedaily.com
Why Australians are hoarding 5¢ coins and gold bullion

Households were not only hoarding canned goods and toilet paper during the coronavirus pandemic, they were also stockpiling rolls of coins. Demand was so high for 20¢, 10¢ and even 5¢ pieces when COVID-19 sent the nation into lockdown that the Royal Australian Mint was forced to double shifts to produce enough change to keep up over the past financial year.

OTTAWA — You could soon have a little splash of blue in your pocket, with a new dime from the Royal Canadian Mint commemorating a national icon. The Mint is launching Canada’s first-ever coloured dimes to commemorate the 100th anniversary of Bluenose, the famous fishing schooner that graces the coins.