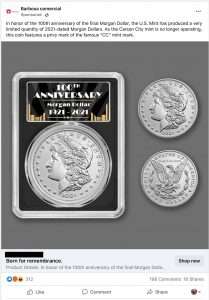 Since August, reports of fake Morgan Dollars have appeared, but the scammers are coming out of the woodwork with the holidays upon us.

Within the hour, I found ads for three different scammers trying to sell 2021 (CC) Morgan Dollars with images in a PCGS slab for $19.95.

First, you cannot trust any of the pictures. All of the pictures were copied from around the Internet, including the PCGS sample slab. These pictures appear in many places when performing an image search. Some of the images are edited versions from the U.S. Mint’s website.

When I entered the serial number on the image of the slab on the PCGS website verification form, they reported it as an invalid number.

No legitimate merchant will sell a newly released coin below the introduction and spot prices. The U.S. Mint sold the coin for $85 each, and the spot price closed at $22.13 today. Anyone selling a highly desirable coin for $19.95 is trying to scam you.

Within an hour, Facebook sent a report saying that they reviewed my reports from the ads. Facebook removed all of the ads. But I know this is a case of whack-a-mole, and more ads will appear soon. I encourage anyone using Facebook to report these ads when they appear on your timeline. If we work together, we can limit the impact of these scammers on the hobby.