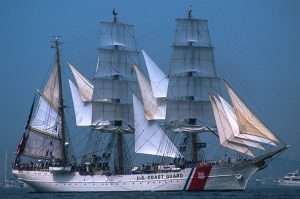 Coin collecting is a fun hobby, and while I have a nice collection, lately, I have become interested in collecting more personal numismatics. By expanding my collection to exonumia, I can find numismatics with ties to my past.

I recently searched the popular online auction site and came across a bronze medal that made me smile. I found a 1986 OpSail commemorative medal.

Operation Sail (OpSail) was founded in 1963 with the support of President John F. Kennedy to celebrate significant milestones in the New York Harbor. OpSail features tall ships of the past but welcomes all sorts of ships from around the world. The first OpSail was the 1964 World’s Fair Parade of Ships. All OpSail events are on July 4th.

The third OpSail was the 1986 Statue of Liberty Centennial, and it was a big year that would become a year-long party for New York City. The Mets started hot and ran away with the National League East, leading to a World Series victory in the fall. The Giants ended their 1985 season in great shape during January. While the Mets were winning the World Series, the Giants were putting their imprint on the NFL, which led to a Super Bowl victory the following January.

In 1986, I lived on Long Island and worked on Wall Street, enjoying life. My parents came to New York for a visit, and we had to go to OpSail. We piled into my car and drove to the Fort Hamilton neighborhood, and we parked and walked to the park area south of the Belt Parkway.

I do not know if the park area along the shore has a name, but we joined the throngs of other people milling around the park to watch the ships sail by. While the parents stayed in one area, the group of cousins walked closer to the Verazzano Bridge to get a better look at the harbor. We had a good view of the water show from the FDNY fireboats. Later, we drove back to Long Island for dinner and took the train into Manhattan to watch the fireworks.

We made our way downtown to the area just north of the entry to the Staten Island Ferry to watch the fireworks. When the fireworks ended, we walked up a few blocks, grabbed some drinks, and let the crowd lighten before taking the train back to Penn Station and back to Long Island.

I dropped my parents off at their hotel before returning to my tiny one-bedroom apartment. The last thing I remember was sitting in a chair drinking water before waking up a few hours later in the same chair.

Finding the medal brought back the flood of memories from that day, and I had to add it to my collection.

While looking for more information about the medal, I came across a 1986 story in The New York Times that described the medals produced for the Statue of Liberty Centennial.

The medal’s obverse is the logo used by OpSail ’86, representing the tall ships surrounded by a rope tied in a square knot. The initials “gd” are along the rim under the left loop of the square knot. The reverse shows a tall ship passing by the Statue of Liberty.

The “gd” initials are likely for the Green Duck Mint of Hernando, MS, who struck the medals for OpSail ’86. Maranatha Holdings of Jersey City sold the medals for the organization.

Now that I know there are gold and silver medals for OpSail ’86, I have to find them to complete the set.

The New York Times article said that the Statue of Liberty Foundation issued 11 medals featuring different reverse themes. Frank Gasparro designed the medals. He retired as Chief Engraver of the U.S. Mint in 1981.

I added all 11 medals to my growing wishlist.