There was a lot of numismatic-related news this week that collectors should note. 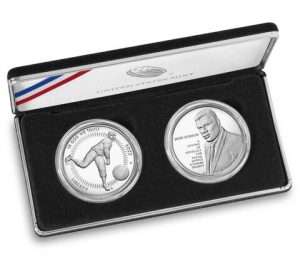 The U.S. Mint announced that the end of the pre-sale of the Negro Baseball Leagues Commemorative Coins is on Monday. As part of the reminder, they announced that the proof silver dollar with the 100th Anniversary Privy Mark has sold out, and other options are reaching their sales limit.

At the same time, the U.S. Mint announced the pre-sale for the Negro Leagues Baseball 2022 Proof Silver Dollar Coin and Jackie Robinson Silver Medal Set. The Jackie Robinson 1 ounce silver medal is currently only available as part of this set.

While Queen Elizabeth took private time to remember her father, the Royal Mint released a good deal of coins to celebrate the Platinum Jubilee. The current lineup includes gold and silver coins ranging from one-ounce to 10-kilo gold coins.

At some point, the U.S. Mint will release the 2022 National Purple Heart Hall of Honor that will include a colorized silver dollar. That will be exciting.

A Bizarre Coin and its Global Effects – Scandinavian Archaeology

What happened to money if a European country went broke in the 17th century? And how did a bizarre coin lead to the introduction of paper bills, as well as central banking systems?

The Underground Railroad, the famous network of safe houses and secret routes that helped enslaved people of African descent escape to freedom in Canada, is the subject of the Royal Canadian Mint's latest issue in its ongoing Commemorating Black History coin series.

The year 1776 was obviously a big year for the United States. But before the Declaration of Independence was signed, another sign of freedom was created by Continental Congress.

→ Read more at wearethemighty.com
What is the Fugio cent – and what makes the coin worth up to $3,500 explained

THE Fugio cent minted in 1787 has long been enjoyed by coin collectors. We explain what you need to know about the rare coin, which is also called the Franklin cent.